Jefferson's loyalists may have to wait a bit longer for their chicken wings, it appears.

Jefferson's has been closed since a Jan. 15 fire damaged the building’s roof and rear, and earlier this month, my colleague Caitlin Doornbos reported that owner Brandon Graham was planning to reopen the restaurant today.

But as of this morning, the reopening date has been pushed to Wednesday, Graham says. He says the original date wasn’t “set in stone,” but that a few small delays — such as Black Hills Energy not restoring gas in time, allegedly — did contribute to the change.

Wednesday’s grand reopening, slated for 11 a.m. to 11 p.m., will feature several giveaways (t-shirts, glassware and more, Graham says) plus a contest for customers to guess how many dollar bills lined Jefferson’s walls before the fire. Whoever guesses closest to the tally, which was taken before the ruined bills were removed, will win free hot wings for a year. 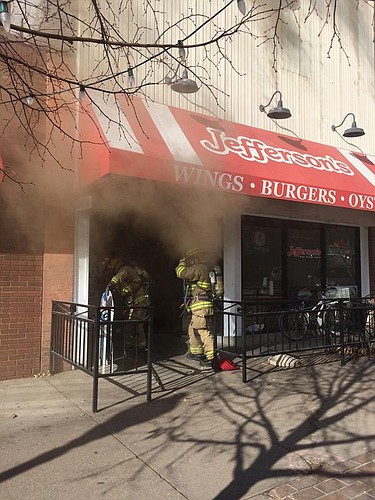 Firefighters investigate a fire at Jefferson's, 743 Massachusetts St., on Jan. 15. by Caitlin Doornbos

Besides wings, folks can expect a few new additions to the menu as well.

“I’d like to keep that element of surprise,” Graham says, declining to give further details.

The restaurant itself has a new look — new flooring in the lobby, open ceilings and some remodeling in the kitchen — that Graham says will make Jefferson’s more energy-efficient.

He says the eatery retained a “healthy 60 percent” of its pre-fire staff, but he’s still looking for more help in the kitchen.

Jefferson’s is sticking to hours of operation of 11 a.m. to 10 p.m. Monday through Wednesday, 11 a.m. to 11 p.m. Thursday through Saturday and 11 a.m. to 9 p.m. Sunday. Graham says he may contemplate late-night hours on weekends down the road, but for right now, he’s just concentrating on getting the restaurant back on its feet.

“We’re obviously very happy to be back,” Graham says. “It’s been a long road.”