I took an extra-long pause, may or may not have sighed out loud, and lifted my fork. A mouthful of smoked chocolate shortcake and a sip of port later, I’d had the last bite of the last course of my last meal at Pachamamas on Saturday night.

After 15 years in Lawrence, Pachamamas ran its last dinner service on Valentine’s Day, and I’m a little misty about its closing. For me, and I’m sure a lot of other people in this town, Pachamamas was not only about fine food but also an experience.

As fellow restaurateur Matt Hyde of 715 noted this week, Lawrence’s food scene owes a lot to Pachamamas and chef/owner Ken Baker. “The whole idea of thoughtful, local, regional cuisine?...The notion of a refined dining experience that was still fun? That’s Ken and Pachamamas.”

The foodie movement has gotten big in the past couple of years, but the things people love about it have been happening at Pachamamas for a long time.

Baker was doing amuse-bouche before it was cool. Plates were always meticulously presented to show off the colors and textures of food. Pachamamas menu changed with every season, and Ken’s dishes maximized the variety of ingredients and flavors the world (often specifically our part of the world) had to offer. He combined sometimes lengthy lists of unexpected things — the kind of combinations some newer restaurants that are trying a little too hard attempt but can’t quite make work — and always hit it on the head.

For example, take the second course of our Valentine’s Day dinner: Compressed Beets and Ember-Roasted Strawberries with Fried ‘Milk,’ Hazelnut, Candied Bacon. We were blown away — these things were clearly meant to be. Especially when the pinot noir got involved!

Pachamamas had great burgers and affordable lunches, but for me that kind of attention to detail and thoughtfulness made it a favorite place for take-your-time dinners or more special occasions.

That’s where I went in college when my parents came to town to take me out for a meal to celebrate my birthday; where I met some of the most interesting people sitting community-style during Scotch, wine or Free State Beer dinners; and where my husband and I surprised my mom with the news she was going to be a grandma.

Last week my husband surprised me when he told me he’d arranged for grandma to watch that baby because we had Valentine’s Day dinner reservations — at Pachamamas.

We had the best time, part of which was oohing and ah'ing over our food. With the combination of last day, Valentine's Day and the news it was closing being out for a while, there’s no doubt Pachamamas could have booked more reservations, squeezed people in shoulder to shoulder. But they didn’t, and that was nice. Pachamamas, after all, has a dining experience to maintain, the kind that makes good memories. 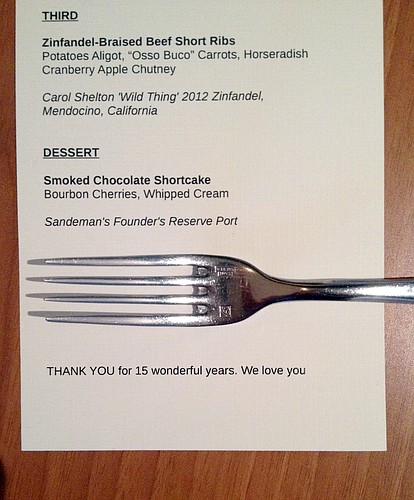