On Wednesday, the Limestone Pizza owner/executive chef will return to the fairground showdown not as a competitor but as a “culinary interpreter” a la Ted Allen in Food Network’s “Chopped.”

During the event, which is slated for 5 to 7:30 p.m., Martin will chat with competing chefs — Brad Brown, of the Bird Dog Bar in the Oread, Simon Bates of the Burger Stand, and Vaughn Good of Hank Charcuterie — about their culinary techniques, offering up tips on integrating seasonal, local ingredients in everyday meals. 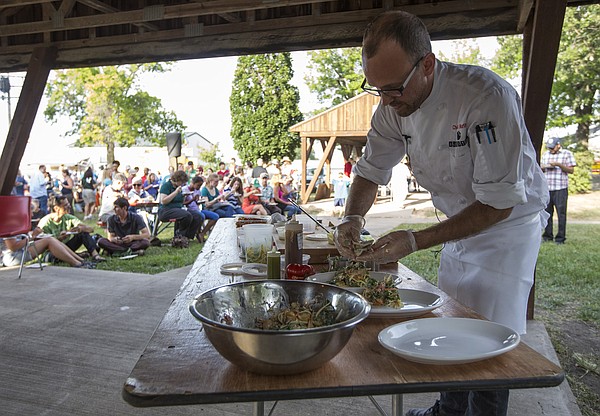 Rick Martin, head chef and owner of Limestone Pizza, plates his pork carnitas chopped salad served with the flat bread as he participates in the fourth annual Chef's Challenge on Wednesday, July 30, 2014, at the Douglas County fair. Martin won first place with his dish. by John Young

As in years past, Wednesday’s competition — which is organized by Master Food Volunteers and Master Gardeners, both with the Douglas County Extension office — will spotlight a particular ingredient.

This year's star ingredient is eggplant, and chefs will use it, as well as other foods cultivated from local farms and school gardens, to create simple, fast dishes that anyone might recreate easily at home. And as in years past, any audience member whose taste buds need convincing can munch on samples.

It’s all about getting people excited about foods grown or produced right here in Douglas County, says Elizabeth Stewart, an at-large appointee of the Douglas County Food Policy Council, which sponsors the event.

“We’re really trying to appeal to a wide audience, ranging from your foodies to your hardcore cooks to busy families that don’t have a lot of time,” says Stewart, who hopes folks will be inspired to revisit the “misunderstood and misaligned” eggplant. There’s more to it than just eggplant Parmesan, she says.

With help from city mayors of Eudora, Baldwin City and Lecompton, competitors' dishes will be judged on taste, presentation, creativity and the all-important “applause-o-meter” from the audience.

The winner gets bragging rights and a plaque to hang in their restaurant, though all participating chefs will share their recipes from the event online, Stewart says. You can stop by the Douglas County Fair’s fifth annual Chefs Challenge at 5 p.m. Wednesday south of the backdrop in the shelter area of the fairgrounds.