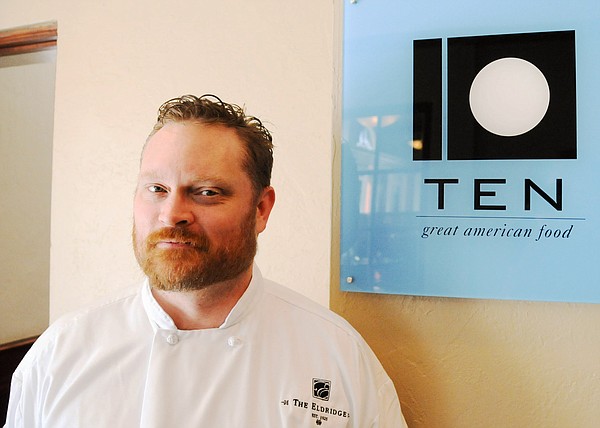 Drue Kennedy is the new executive chef at The Eldridge

Drue Kennedy has been named the new executive chef at The Eldridge Hotel, The Olivia Collection — which manages both the Eldridge and The Oread hotels — announced Wednesday. Kennedy, most recently of Kansas City's contemporary Mexican eatery Zócalo, was recently hired to supervise culinary staff at The Eldridge's TEN restaurant and The Jayhawker bar.

Kennedy, who has also worked for PB&J restaurants, Grand Street Cafe and Chicago's Vivere, has also developed a soon-to-be-unveiled new menu for The Eldridge.

"Drue has already made a positive impression on customers with his well-presented, well-balanced daily specials,” said Nancy Longhurst, general manager of The Olivia Collection, in a news release. “We expect more tasty seasonal cooking, awesome food and beverage pairings and exceptional buffets. On occasion you’ll see him tableside in TEN restaurant checking on guests’ meals. Please make Drue feel welcome and share your favorite Eldridge moment with him.”

Local foodies can meet Chef Kennedy — and sample some of his cooking, which draws from his "passion for Italian food, seafood, braised meats and vegetarian and vegan" cuisine, according to the news release — at The Chamber's Taste of Lawrence event Thursday, Sept. 10, on the grounds of Meadowbrook Apartments, located off Bob Billings Parkway and Crestline Drive.

Tickets for the Taste of Lawrence Mixer, slated for 4 to 7 p.m., cost $40 for the general public, $25 for Chamber members and half-price for employees of Douglas County educational facilities. They can be purchased at www.lawrencechamber.com by calling 865-4411.