We're on our way, LFK... There's still much to be done but we're coming for you! pic.twitter.com/6UA80uwAMF

After more than a year in the works, 1900 Barker Bakery and Cafe is finally open for business in East Lawrence. The artisan bakery, located at — you guessed it — 1900 Barker Ave., is holding a soft opening with limited menu from 7 a.m. to 7 p.m. Friday and Saturday.

As Chad Lawhorn reported back in January, 1900 Barker is owned by Lawrence pastry chef Taylor Petrehn and his brother Reagan. Back then, Petrehn said the focus would be on breads, though he planned to offer a few pastries as well.

From the looks of its Facebook page, the business (which used to house a laundromat) is on track to have fresh loaves of its "Utility Loaf, Seeded Utility and Raisin/Pecan" varieties ready by Friday afternoon. The business aims to use naturally occurring yeasts and without additives to make a healthier, longer-lasting bread.

"Once though [sic] the weekend we'll be continuing on starting the middle of next week with limited hours as we figure out the new rhythm," 1900 Barker posted Wednesday. "See you guys soon!"

Alchemy Coffee now a bakery, too

Alchemy Coffee, 1901 Massachusetts St., has added an in-house kitchen to offer just that, and the establishment now calls itself Alchemy Coffee and Bake House. In-house baker Joni Alexander whips up treats daily in the cutesy little kitchen (lavender wall, shiny red mixer, retro mixing bowls and everything) at the east end of the shop. 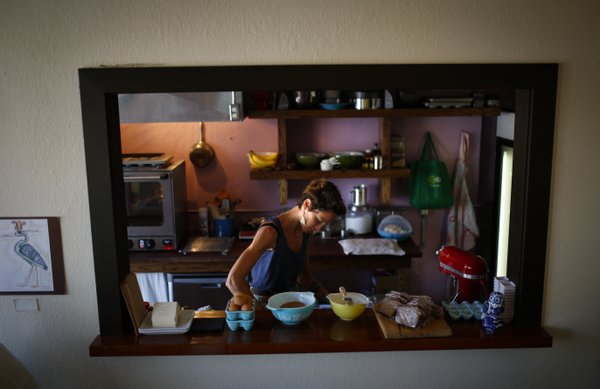 Joni Alexander prepares to bake a loaf of zucchini bread on Tuesday, July 8, 2014, in the newly added kitchen at Alchemy Coffee and Bake House, 1901 Massachusetts St. by Nick Krug

This week I tried the triple-chocolate sea salt cookies — big, soft, laden with chocolate chunks and generously sized flakes of sea salt — and strawberry peach muffins — also big, soft, with sweet crumbly tops and hunks of fruit, all nestled in brown paper. Other offerings include cakes, pies and more muffins, including a blueberry doughnut muffin complete with glaze. 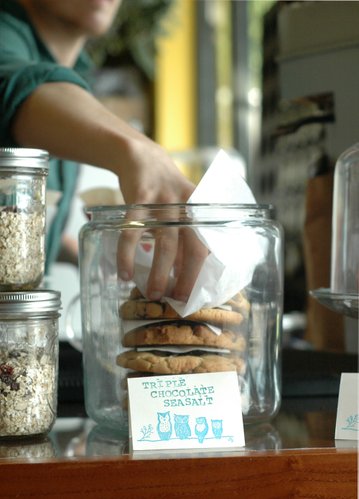 Alexander, a Kansas University graduate who traveled the world while working as a professional model, got into cooking and baking as a hobby.

Alexander started working with Alchemy owner Benjamin Farmer last fall. He had been selling cookies and granola bars made in Kansas City but brought in Alexander’s goods (then baked off-site), which were a hit. The kitchen was completed two weeks ago, he said. Alchemy is known for its cold-brew, sold in bottles and even on draft at several other places around town. Farmer and Alexander said they hope some of Alchemy’s baked goods soon will follow suit.