Printmaker Patrick Vincent, one of the Lawrence Arts Center’s two artists in residence, is on a quest to turn as many Lawrencians into bugs as he can.

For free, residents can send Vincent their photo and the name of the bug they’d like to be, and he’ll create a print of their face on that bug’s body. Vincent gives an artist proof of the print to the subject, and keeps the linoleum carving he printed it with for himself. The plan is to use those carvings in a later installation.

Last time I checked with him, Vincent said he’d completed a number of bugs but was still hoping for more. Apparently, he says, a lot of people are kind of creeped out by the idea of seeing their face on a bug’s body ... which is part of the reason Vincent, who regularly uses animal themes in his artwork, picked bugs for this project. He says, "The theme of bugs is an invitation for people to connect with a part of the natural world that is often ignored or reviled."

I thought the project sounded fun, not creepy, and sent Vincent my own picture and request to be a praying mantis. (Praying mantises clearly are not smiley bugs, and this was the only demure picture I seem to have taken in the digital age. Vincent left the veil on, which is actually kind of funny given that female mantises have been known to eat their mates.) Here I am: 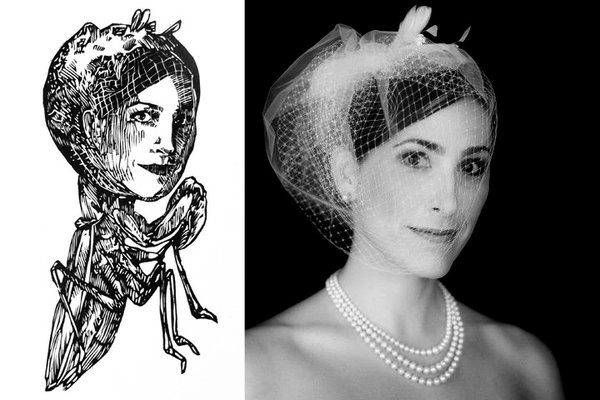 Here’s Vincent and his own bug rendition of himself, as a honeybee:

Fellow artist in residence Monika Laskowska, incidentally, went with the potato beetle for her bug portrait. To submit your photo for the Bugs project, Vincent provides more information and instructions on his website. 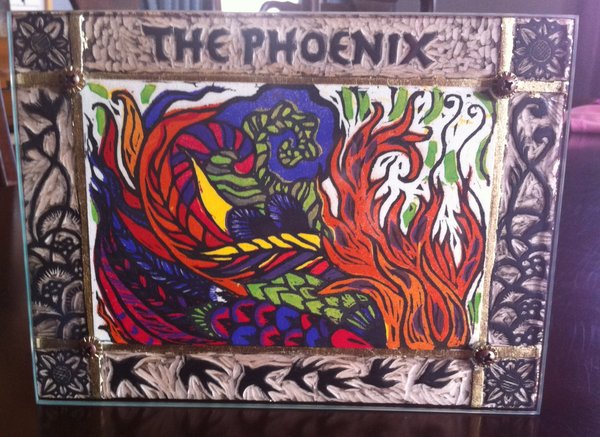 One of six 2012 Phoenix Awards by Sally Piller. Submitted photo. by Sara Shepherd

We profiled each of this year’s five Phoenix Award winners in Sunday’s paper and here on Lawrence.com. But there’s another key artist involved with these awards — the one who makes the hardware that the winning artists take home.

The Lawrence Cultural Arts Commission picks a different artist each year to create the actual Phoenix Awards, and this year it was printmaker and Old West Lawrence resident Sally Piller. Piller was commissioned to make six pieces — one for each award winner and one to display at the Lawrence Arts Center with previous Phoenix Awards.

Piller described her process for creating the unique prints-slash-sculptures:

She created six color woodblock prints — using oil-based ink on Japanese washi paper — and mounted each on the back of one of the solid maple color separation blocks used to create the prints (the photo below shows a step in the process). The borders are hand-carved, rolled with oil-based ink and accented with gold-colored leaf. 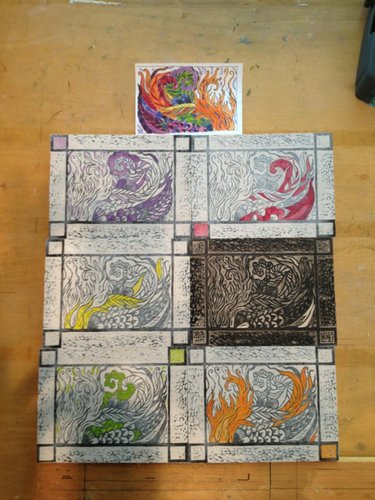 She mounted the prints using gesso and rice paste, then protected them with floating glass attached with rosette screws. Here are the finished awards lined up at Sunday's reception for the winners. 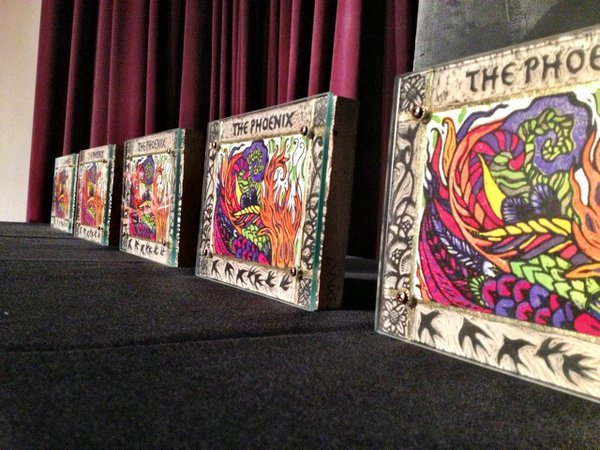