Johnny’s Tavern named most iconic bar in Kansas by Thrillist 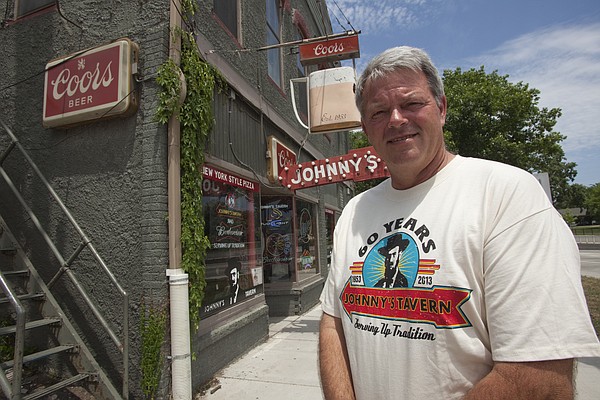 Johnny's Tavern, pictured here in 2013 with owner Rick Renfro, has been named the most iconic bar in Kansas by the website Thrillist. by Richard Gwin

"Serving Up Tradition Since 1953." So reads the weather-worn, metal sign outside Johnny's Tavern, the north Lawrence establishment that men's lifestyle website Thrillist recently named the most iconic bar in Kansas.

Thrillist praised Johnny's, located across the river at 401 N. Second St., for its colorful history and ability to attract a diverse crowd of "local townies, bank presidents, and college kids."

And, from the looks of Thrillist's roundup, the Lawrence bar has some pretty good company. The list includes gems from every state (plus Washington, D.C.), like Chicago's Green Mill (reportedly one of Al Capone's favorite hangouts) and a 239-year-old Connecticut tavern that used to function as a Redcoat command center during the American Revolution.

Johnny's, of course, boasts a pretty interesting history of its own. Originally built as a hotel/grocery store back in 1910, the building evolved from a pool hall to a Prohibition-era gin joint to eventually, in 1953, the Johnny's Tavern we know today.

The bar-restaurant has another location in west Lawrence, at 721 Wakarusa Drive, as well as seven Kansas City-area branches.