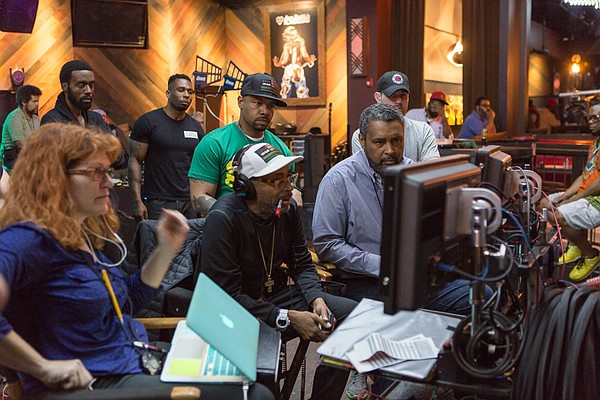 Spike Lee, center, and Kevin Willmott, right, on the set of "Chiraq."

Audiences can get their first look at "Chiraq," the Spike Lee film about Chicago gun violence co-written by Kansas University professor and filmmaker Kevin Willmott, after the debut trailer was released online Tuesday.

The film has been surrounded by controversy since it was first announced, and now viewers can see what all the fuss is about.

Perhaps most surprising is the tone of the trailer, which is fairly humorous despite the serious subject matter, but blending comedy with serious subjects is nothing new for Lee. The plot of "Chiraq" also looks to be inspired by the classic Greek comedy "Lysistrata," about one woman's attempt to end a war by withholding sexual privileges.

The film boasts an impressive cast, including (a rhyming) Samuel L. Jackson, John Cusack, Angela Bassett, Nick Cannon, Dave Chappelle and Jennifer Hudson, among many others.

You can watch the trailer below, and eagle-eyed viewers can spot Willmott in the background of one scene that looks to be set in a barbershop.

For more on Willmott and the film, check out a recent interview the filmmaker did with Journal-World film critic Eric Melin. "Chiraq" is slated for a theatrical release Dec. 4 in the midst of prestige picture/Oscar season, followed by a release on Amazon Instant Video.