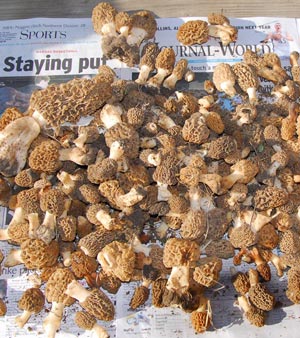 The snakes are out. The mayapples are up. Tax day has come and gone. To the average person, these events don’t mean much of anything, but to the experienced Morel hunter, it means the most exciting time of year has arrived.

Every spring, for about three weeks, one of the last truly seasonal crops pops up out of the ground; the Morel mushroom. As Morels are known to be notoriously difficult to cultivate intentionally, the enthusiasts who search for them are literally limited to the brief window of time in spring to gather what will become their year’s supply, although its rare for any morel hunter to possess the discipline necessary to ration their mushrooms out over the twelve-or-so months until the following season. As such, they are a currency which is often times valued more highly than money.

To understand a little bit of the science of mushrooms (and this is the only bit that I know) is that mushrooms are the only exposed part of what are called mycelia, which are fibrous fungi that live under the surface of the soil. Usually a mycelium will absorb food from the soil around it, and as such, they are commonly found near tree roots. Supposing a food source (like a tree) dies, the mycelium will become stressed, and will sprout mushrooms above ground in order to spread spores, ultimately to propagate other mycelia.

Before we go any further, it should be noted that a good business person never reveals their sources. This is no different with mushroom hunting. Don’t expect anyone to share their mushroom “spots” with you. I’ve found that most folks know someone (whether they realize it or not) who is into hunting Morels. There is a fair amount of lore, legend, and truth-bending that comes with mushroom hunting, so you may hear varying strategies for finding them. Supposing for a moment that you can’t think of anyone who mushroom hunts, and you’d like to try your own luck, here are a few pointers:

• Be patient. It’s best to look forward to a relatively aimless stroll in the woods which might be improved by finding morels rather than overlooking a nice walk in the woods if you don’t happen to find anything.

• Mycelia associated with morels seem to prefer cedar and elm trees. Near the bases of ailing or dead elm and cedar trees are good places to look for morels. They don’t seem to like oak trees though. South-facing creek banks are a good place to look as well.

• Hope for spring rains and warm-ish temperatures. As soon as we have our first genuinely hot day, mushroom season is almost always over.

• Morels will crush under their own weight, so it may be best to bring a couple of containers in case you happen upon a good haul. This way you won’t smash all the ones at the bottom.

• Some people like to mushroom hunt with mesh bags in hopes of spreading the mushroom spores further. This validity of this strategy is contested, but I don’t think it hurts anything.

• Look where you’re walking. It’s amazing how often I find myself looking out a few feet in front of me only to look down and see that I’m practically standing on some mushrooms.

• If there’s one, there may be more. Remember the mycelia. If there’s one morel, there are probably others close in the vicinity.

• While morels are totally safe to eat after being cooked, it’s best not to eat them raw. They contain a mild toxin which can affect your red blood cells if they are consumed prior to cooking.

• Even if you’ve never had morels and you’re not sure if you like them, they’re still worth collecting. You probably know someone who’d be interested in taking them off your hands, and frequently restaurants and produce markets are interested in purchasing them as well.

• Perhaps most importantly, make absolutely sure you know what a morel looks like. Mushroom hunting is fun, but it can be dangerous if you eat improperly identified wild mushrooms. This brief guide has great photos of various kinds of legit and false morels from this area.

It’s still early in the season so far this year. I expect that this week is when the morels will really start popping up. I spent a good part of this last Saturday out looking, and my buddies and I came up with about a dozen and a half small mushrooms between the three of us.

If you’ve never gone mushroom hunting before, give it a try. It’s a great example of local, sustainable food and it’s a perfect reason to spend some time outside. It may take a couple of attempts before your searches become fruitful, but it’s amazing what the first Morel of the year will do for your foraging morale. You’ll be hooked before you know it.

The heat this week better bring em out soon--otherwise, I may never get past your No. 1 pointer.

a few revisions and additions i would like to make. they call me MycoloJay.

"they are commonly found near tree roots."

This may be true with morels, but mushrooms (or literally fungi) can grow near anywhere there is moisture and nutrients provided by a substrate, which can be almost anything you find outside. Mushrooms use live and/or dead trees, buried or showing roots of live or dead trees, poop, bodies, or they will just find enough to grow in stark places like weakened grout between stones inside a cabin, etc. Near anywhere, but each mushroom favors the nutrients provided by one or many of those substrates, so this is a pretty easily looked up way of separating . I recommend a field guide anyway if you seek wild mushrooms to eat, no matter how smart you think you are.

"As soon as we have our first genuinely hot day, mushroom season is almost always over. ..... It’s still early in the [about three week] season so far this year." First part is true, but I definitely disagree with at least part of the second line as people have been finding Morels in Lawrence for at least a week or two. I can't say that I disagree the Morel season is always short, but I WANT to disagree with your three week approximation for the sake of my tummy. I know I have been finding Morels for about a week, haven't been out every day, and on two of those days had more than I could push to friends. I supplied a party with Morels yesterday.

"Perhaps most importantly, make absolutely sure you know what a morel looks like." AAAAAAAND know what a FALSE MOREL looks like. The truth of the matter is there are many kinds of true and false morels and the best way, in my humble opinion, to correctly identify a Morel (if you're at all unsure) is to cut it in half lengthwise from top to bottom. If the inside of the mushroom has little "rooms" or is at all filled it is false. If the inside is completely hollow (and will most likely have bugs), you most likely have a true Morel. Don't worry about the bugs cause you will need to take the mushies home to soak for a while in warm salt water just to get the bugs you DON'T see. And cook your Morels!!! Just because they are edible does not mean they are edible raw.