Last year, in a fit of domesticity, I made pumpkin puree a la Pioneer Woman.

I had no idea what I would do with it. I don't like pumpkin pie, and figured that it logically followed that I would not like any pumpkin-y recipes.

Still, I made the puree. Because I LOVE HANDLING PUMPKINS, and I can't keep my mitts off them. One year, I bought a dozen pumpkins and forced my roommate and neighbor to sit on the living room floor and carve them all with me, until their arms fell off and they shouted expletives at me from under a pile of pumpkin goo. I thought it would look cool to have a whole slew of pumpkin faces peering out from the front porch of our East Lawrence Victorian house. I did not consider anyone else's feelings about the matter.

Mr. Meat and Potatoes does not share my penchant for pumpking carving. Last year at Halloween, he was on the road, anyway. It's just not as fun to cut a jagged hole in the top of a pumpkin and dive elbows-deep into the slime unless you have someone there with you to admire your handiwork. And, as a sidenote, it HAS TO BE YOUR OWN HANDIWORK. I do not believe in those patterns and stencils. I also do not believe in painting on the pumpkin. It has to be an old school jack-o-lantern, and it has to be a design of one's own making. Just sayin'.

So I didn't have anyone to carve with, and it just didn't seem right to go ahead on my own. Instead, I tried to assuage my needs by cutting open a gourd and making it into puree. Usually, an excuse to use my Cuisinart makes me feel better, no matter what tragedy has befallen me.

Once I had the puree made, I didn't know what to do with it. Because, you know, I don't like pumpkin pie. Also, I will admit that I am not a big fan of pumpkin bread, or pumpkin biscuits...you see where I am going. I had this puree, and I didn't really want to make anything out of it. It was the joy of making the stuff that got me, and I hadn't thought beyond the cutting of the gourd.

Eventually, I thought of some things that sounded good to me, and experimented a little.

One of the more successful endeavors was a pumpkin waffle. I love the texture of waffles, with their crispy outsides and soft insides, and I love that they are so excellent for holding all manner of gooey ooey toppings, as far and wide as my rear end.

2) Combine dry ingredients, except the sugar.

3) Mix together the butter, sugar, pumpkin puree, vanilla extract, and buttermilk. Beat until well-combined. Then stir in the dry incredients.

4) Beat or whisk the eggwhites until peaks form, but don't overbeat and make them stiff. Fold them into the batter. 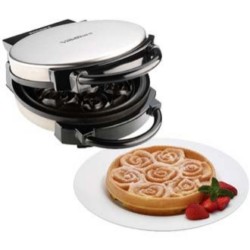 5) Grease the waffle iron with oil or cooking spray, and spoon batter in quickly. Cook according to the manufacturer's instructions. All waffle irons are a little different. Speaking of waffle irons, don't you want this one? I think they sell it at Weaver's. I do not own it. YET. HINT, HINT, Mr. Meat and Potatoes. Unitasker? Yes. Do I care? NOT A WHIT.

For the apple topping:
2 apples, any kind will do, but I always buy Fujis
2 T butter
1/3 C dark brown sugar
1/2 tsp ground cinnamon
1/8 tsp nutmeg
1T lemon juice
Slice up the apples into bite sized chunks, and heat all the ingredients over medium heat in a saucepan until the sugar melts into a sauce and the apples are tender - about 5 minutes.

Whipping Cream:
1 C heavy whipping cream
1 tsp vanilla extract
1 T powdered sugar
Beat the cream until it stiffens, and then fold in the sugar and vanilla.

Serve the waffles piping hot with apples and cream on top. And, my recommendation is to do so for dinner. This is too good and too fancy for breakfast.

I put a layer of pumpkin puree into a turkey sausage and spinach lasagna last night! Just a hint of pumpkin flavor and it kept the lasagna really moist.

I bought a sweet potato pancake/waffle mix at Central Market. Wonder if that would be similar. I've been afraid to break it out on my kids--maybe with apples and whipped cream on top they would not be so skeered.

Would never have thought of the lasagna application, but I'm up for anything! Brilliant!

Amy, I would eat a piece of poo if it had whipped cream on top. I am sure your kids agree.