Wherein I eat my words, and my chicken

Because I am a ridiculous control freak, I plan our meals for two weeks at a time, in advance. I'm not sayin' I always actually make each of those meals, on its designated night, but the process helps me to shop efficiently and avoid a bajillion mini-trips to the grocery store.

Recently, in reviewing my planned dinners, I realized that we are pretty much a chicken-free household. I blame my husband. A) He is afraid to grill it. Something about salmonella. B) He likes beef. And then beef again. And how about a hunk of beef for tomorrow?

Still, I like to cook up a chicken strip now and then, and I enjoy a chicken salad sandwich or a chicken enchilada from time to time, so on my last trip I went ahead and picked up a package of what I thought were chicken tenders. But it turns out, I absentmindedly got whole breasts. The boneless and skinless kind. Which I abhor.

There is nothing drier and more tasteless than a boneless, skinless chicken breast. It is the meat equivalent of plain toast.

But, determined to be frugal, I had to figure out what to do with them. After a quick shout out on twitter for suggestions on how to make the things less hockey-puckish, I decided to brine them all and then have Mr. Meat and Potatoes grill them, in one batch.

To brine chicken, just boil 4 quarts of water with 1.5 cup of kosher salt. When the water is completely cooled, toss in the chicken and refrigerate overnight. The brining will add loads of flavor and juiciness to the otherwise bland and boring meat.

I planned a meal for Mr. Meat and Potatoes and myself that night, and then was going to freeze the remainder of the chicken for use at a later time. Because of this, I didn't want to do any fancy flavoring to the meat that might later counteract with what I wanted to use it for. So we just sprinkled a little salt and pepper on and threw them on the grill. 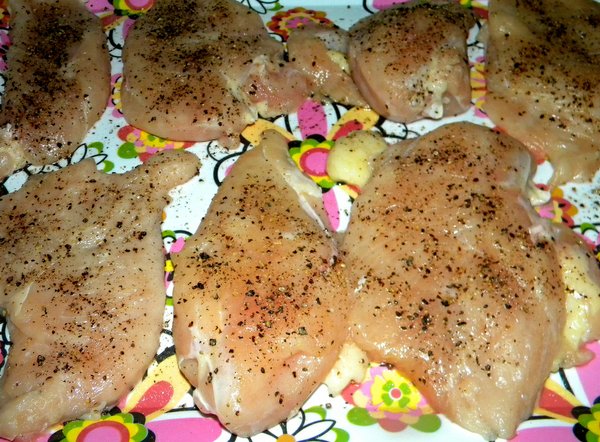 Then I raided my cupboards for some ingredients to make something delicious enough to go with the chicken that I'd forget I was having a boneless, skinless chicken breast for dinner.

First, I pulled out a can of quartered artichoke hearts. Mr. Meat and Potatoes looked at it suspiciously, but didn't say anything.

Then I fetched some mushrooms from the refrigerator, and Mr. Meat and Potatoes' face turned a new shade of purple, with all the holding-in he was doing of the comments he really, really needed to make, about how artichoke hearts were bad enough, but REALLY? I was going to feed him fungus, too?

Then I pulled out some feta cheese and half and half, and I saw him start to breathe again. I guess he figured if I was making a creamy cheesy sauce, he could pick around any other unsavory bits and it would be worth it. I never make cream sauces. Not only are they ridiculously fattening, but they generally are boring. I really never did meet an alfredo sauce I couldn't live without. But I figured feta? And a little white wine? This had to be flavorful and delicious. Feta, coupled with my artichoke hearts and fresh mushrooms? I was pretty excited.

So, to begin, I chopped the artichoke hearts up a little bit more, and added them to a saute pan with a cup of sliced button portabellos, two cloves of minced garlic, and two tablespoons of extra virgin olive oil. I sprinkled with pepper and only a pinch of salt, because I didn't want to over-salt due to the inclusion of the feta in the sauce later.

Saute over medium heat until everything is softened. 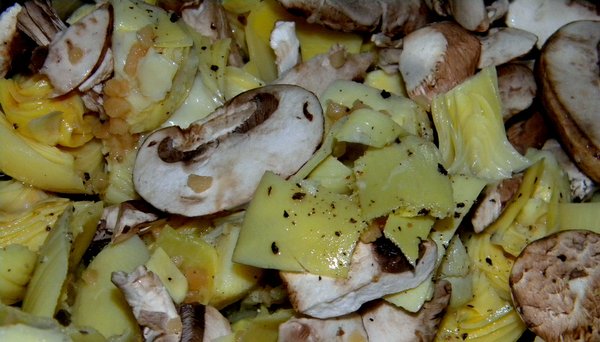 Then I added a 1.5 cups of half and half, 1 tablespoon of flour, and about half a tub (3/4 C?) of feta to the mix, and stirred until the sauce became bubbly and thick. Then I added half a cup of white wine to thin the sauce back to a good consistency and add a little extra kick to the flavor party. At this point, I also cut a little fresh dill into the sauce and added a little more salt to get it to just the right level. Always best to salt and pepper at the end. 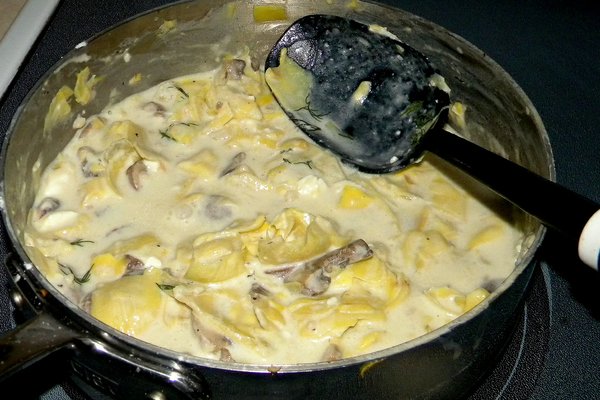 I had some pasta boiling all this while, so by the time Mr. Meat and Potatoes came in from the grill, I'd whipped up this lovely sauce and had the meal ready to go, including some snow peas in citrus-balsamic sauce and cashews on the side. 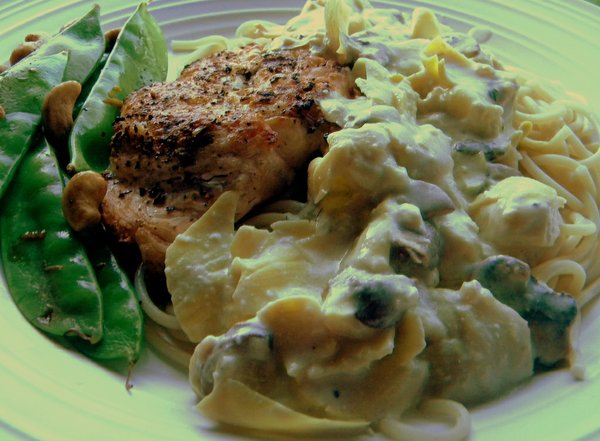 Mr. Meat and Potatoes loved this dish, and didn't even pick out the mushrooms. And I still have a freezer full of frozen chicken breasts that I can whip out when I'm feeling too lazy to really cook. I have to admit, the chicken was delicious, and I might have to change my attitude about the poor chicken breast. What did it ever do to me?

Will you be my girlfriend? :)