Lighten up! Have a chicken tender.

I usually start daydreaming about what I'll make or have for dinner at about 2:00. If there isn't already a plan in place such as a crock pot perking away with a roast in its porcelain belly, or a promise to a husband of a pan fried rib-eye, I start imagining what I can make that won't require hours of thawing or hours of slaving in the kitchen when all I really want from my evening is elastic waist pants and some couch time. One of my go-to items in this situation is chicken tenders. We love them, and they're fast and relatively easy.

But tonight, in continuance of my half-hearted effort to cook more healthfully, I decided to forgo my usual fried strips of breaded chicken and my creamy buttery mashed potatoes for a little lighter fare. I have always turned up my nose at people who say they can bake chicken strips and "They're just as good as the fried ones! Really!!" I am sorry, I don't buy it. Baked is never as good as fried. This is not to say that baked is bad, it's just not fried.

But, tonight, I decided that it was time for me to join the ranks of mommies around the world who are trying their darndest to feed their kids something more healthy than what McDonald's can offer, and bake some stinkin' chicken strips. And while I was at it, I might as well bake some dang french fries, too. Who knew? Maybe it would be edible. I was skeptical, but my son? He is a vegetarian, save hot dogs (I KNOW), and chicken nuggets (I SAID, I KNOW). So maybe, just maybe, he would eat a chicken "nugget" that I made, and it might be just a little better for him than what Tyson can do.

I started by prepping the fries. I was feeding two people and one tiny question mark, so after turning on the oven to preheat to 450 degrees, I cut up two normal sized potatoes and one small one into wedges. Each potato made eight wedges, and I cut those eight in half. 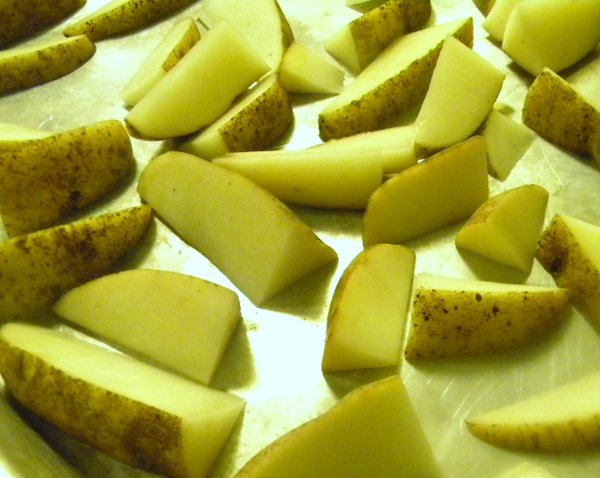 Then, I spread the wedges out on a cookie sheet, and drizzled them with a couple of tablepoons of olive oil. I sprinkled a bit of garlic powder, Lawry's seasoning salt, cracked black pepper, and rosemary over them, and used a spatula to toss it all around so everything was covered. Into the hot oven they went for 35 - 40 minutes.

In the meantime, I started on the chicken, which had been thawing since I got home from work an hour before. I had some baguette chips I had toasted for bruschetta left over from a weekend party, and they would make a perfect coating. I just put them in a bag, and gave them a good beating with my meat mallet - always a welcome activity. If you don't happen to have bruschetta toasts laying around (although, really who doesn't), panko bread crumbs would work just as well. 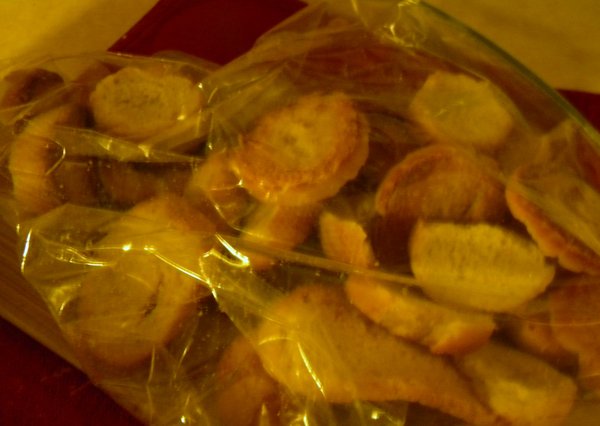 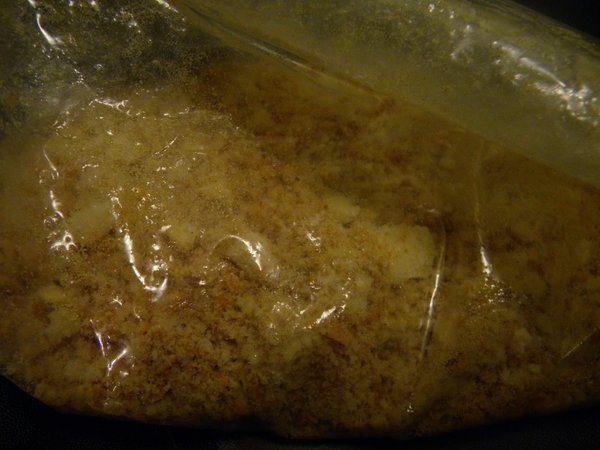 When they were good and pulverized, I also turned four vanilla wafers into crumbs, and mixed them with the breadcrumbs. I also mixed in a dash of kosher salt, a sprinkle of cracked black pepper, 1/4 tsp of oregano, and a dash of Lawry's seasoning salt. Yes, I'm nuts for the stuff. I think it's highly under-rated in the culinary world.

Then I cracked two eggs and whipped them up with 1/4 C of milk. I gave each tender a bath in the wash, covered it in a thick coating of the breadcrumb mixture, and laid it on a cookie sheet that was pre-treated with cooking spray. I did this to six tenders, and then turned down the heat in the oven to 375, moved the fries from the top rack to the bottom one, and popped the tenders on the top. They should bake for around 15 minutes, depending on thickness. At the end, I ran them under the broiler for a minute to brown up the tops.

That fifteen minutes gave me enough time to whip up a little dipping sauce I thought to be a little better for us than our usual ranch. Since I was planning on serving edamame as our "something green", I decided to go for Asian-flavored dipping sauce.

Microwave for ten seconds or until the peanut butter is soft enough to stir into the rest of the ingredients. Wisk together until everything is well-blended. 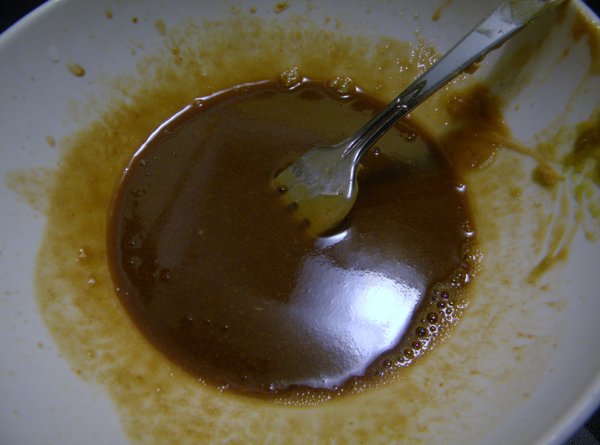 I figured Mr. Meat and Potatoes would walk in and see my baked strips and say "Wha??" in that "Are we really going to eat this?" way, and Johnny would take one look at a chicken product that didn't come from McDonald's or Tyson and toss the whole mess off of his tray. Seriously, I was prepared for a family revolt, possibly a storm-out. However, everyone surprised me. Mr. Meat and Potatoes mentioned several times that he liked the chicken, and Johnny ate everything on his plate, including soy beans, with gusto. 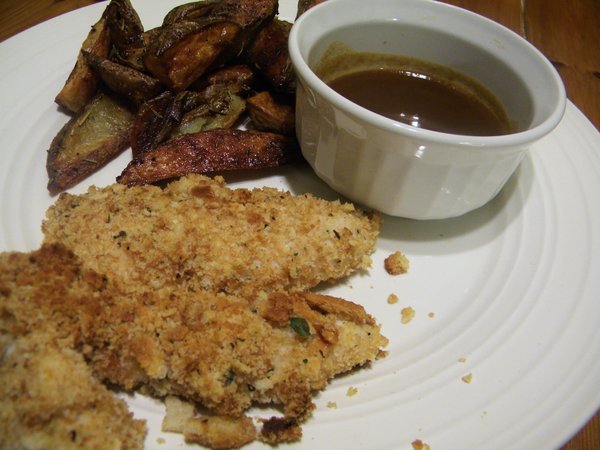 I wept while I ate. I don't even remember consuming my own food, I was so verklempt over my family's enthusiastic consumption of this mostly-healthy meal. Now, I'm not gonna try to lie and tell you this was EVERY! BIT! AS GOOD! as its fried counterpart. It's not. It's a whole different animal. But for real, people, it was totally delicious anyway and a treat in its own right. I don't think it's really fair to compare this meal with a fried equivalent. This one is, if I do say so myself, a little more refined. The flavors are just a smidge more mature, and the whole thing doesn't make you want to take an hour nap afterward.

Who knew I had this capacity for change? I feel that this was a real growing experience for all of us, and for once, not in the waistline way.

I am amazed at your creativity and will do this --for sure. Mom

Sounds nummy! I've done similar oven-baked fries with a little parmesan added to the seasoning (tossing the potatoes in a baggie to coat them) and that's is really good, too.

rcmom, I dug through my refrigerator twice, looking for some parmesan cheese for just that. Strangely, w'ere out. Which never happens. However, I did find several other difficult to distinguish things in the process of digging that I managed to toss, so the effort was not for naught. ;)

So yes to parmesan on all of that stuff.

Holy shit, when did Lawrence.com become a Better Homes and Housekeeping recipe swap? God forbid we get a video game review or something besides "Festive Holiday Circlejerk Recipe Happy Funtime 2010"

Advocate for your video game review or whatever. I'm all for it. But there's no reason to throw out a good "Circlejerk" a lot of us take interest in. Blow it out your ass, Pinto Bean.