When you want beef and broccoli, and there's not the appropriate kind of beef in the freezer, and you're too lazy to go to the store after work, you improvise. And I do mean improvise. Like, you make a dish that is virtually unrecognizable from the inspiration point, but it does contain two major common ingredients: namely, soy sauce, and broccoli. The rest? Meh, up for grabs.

I have said before that I really like to do stir fry on weeknights, because it doesn't make a lot of dirty dishes, it cooks fast, and it has everything you need all in one dish - no need for messing around with distracting side dishes.

So yeah, I was determined to have stir fry, and I had broccoli in the refrigerator that I had to use before it lost its turgor pressure (have you ever seen broccoli that met this fate? It's truly sad). The rest was simply a matter of collecting enough other things to cobble together a meal. Enter, the new and improved version of beef and broccoli, its prettier twin: CHICKEN and broccoli.

I know. It's crazy. I'm a wild girl. They ought to bring a trashy film crew over here to take pictures of me exposing my frying pan.

Listen, my husband AND my baby ate this stuff, so in my book, this is quite possibly the best meal I ever made. AND it was really yummy. AND there are leftovers. Boo-yeah. My lazy side wins out more often than not, but if I can make a meal that includes a bunch of fresh stuff and it just happens to take less than thirty minutes to make, and only dirties two dishes in the process, I don't call it a lazy meal, I call it GENIUS.

I started by whipping up a sauce. You want to marinate your chicken pieces in the sauce for as long as you can, which in my case was about ten minutes. 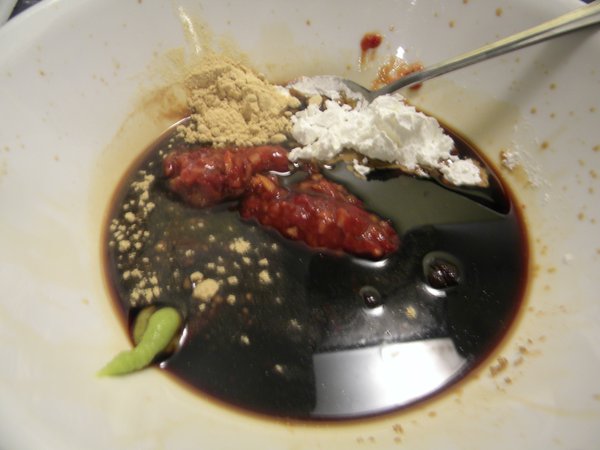 Whisk all this together, and then add a cup of water for volume.

Next, dump in about four cups of diced, uncooked chicken. For this, I used a package of chicken tenders, because they thaw quickly. To be honest, I don't thaw them quite all the way, because a partially frozen chicken tender is much easier to cut into bite-sized pieces than a thawed one. 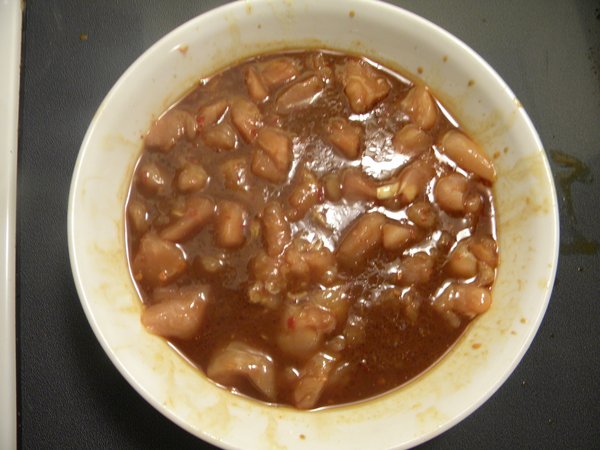 While this sits, get the rest of the show in order. Now would be a good time to start cooking your rice. I'd do two cups of jasmine rice if I were you, and here's a little tip since I like you so much. To make really good rice, start by putting the rice in a large enough skillet (one that has a lid) to hold the requisite water for two cups of rice (I'd say 3.5 C). Then add a pat or two of butter or oil, and turn the heat on to medium high. Stir those rice grains around in the butter until they're all covered, about two minutes. Then add the water, bring it to a boil, and then reduce the heat and put the lid on until the rice is perfectly cooked into nice little fluffy individual pieces.

Once the rice is started, heat a few tablespoons of vegetable oil in a large skillet, again, one with a lid. This one with high sides is terrific for stir fry. I got it at Target, if you were wondering. A long time ago. And it still rules. 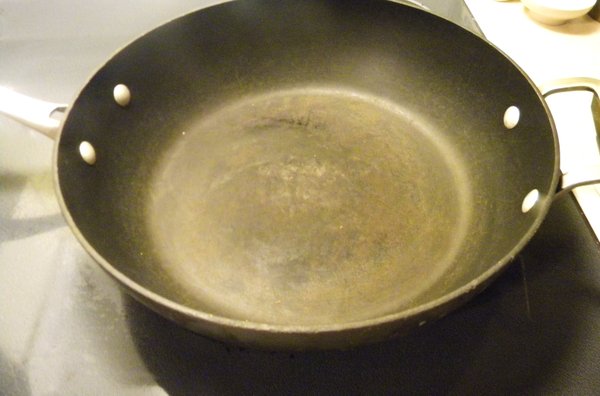 Cut up your veggies. I had a large head of broccoli which I cut into good-sized pieces, retaining part, but not all of the stalks. I also cut up half a red onion, and reached into the cabinet for a can of cashews, which turned out to contain about 1/4 cup, a perfect amount for this application.

When the oil is hot, add the chicken and sauce, and stir. I like to push everything to the edges of the skillet so it's not over direct heat. Then, when the chicken was about halfway cooked, I added a cup of water and the rest of the ingredients to the center of the skillet, and smacked on the lid.

The trick to doing this well is to not overcook the broccoli. You don't want floppy broccoli that has no color or flavor. You want it steamed, about seven minutes, give or take. Keep an eye on it.

At the end of the steaming time, before the broccoli gets too cooked, take the lid off, stir everything together, and let the sauce thicken a little if necessary. Let all the ingredients simmer for about three minutes, or as long as it takes to get everything to the right consistency. 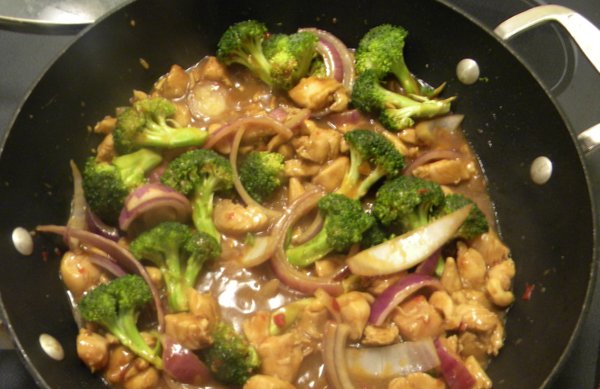 By this time, your rice should be done, and you've got a healthy and delicious meal ready to plate.

Did I mention I think this meal is genius? And that it made enough for leftovers? There were so few dishes to do, Mr. Meat and Potatoes gallantly offered to take care of them. So he did that, while I lounged on the couch for three and a half minutes before I got up to give the baby his bath. It was almost enough rest to replace that silly sleep habit I've aquired over the years.

This looks really good! Thanks! And I think that sauce would be good with a pork or beef stir fry, too. And now I have a good excuse to buy wasabi paste. Always wanted one.

RCmom, go get you that wasabi paste. If it goes bad, I don't want to know about it... I've had two tubes in my fridge forever.(Still using.)

I have lots of recipes that can use it, but only a little bit is required at a time. My favorite is a wasabi pan sauce I made for steak. The recipe is here on l.com somewhere... fairly recent.

Mmmm!! sounds good! I would keep a little Shiracha on hand just to kick up a notch.

Just made it for dinner tonight. Leftovers? HA!