I'm no caterer. In fact, I think catering is hard and thankless. I have friends who love to work on cars, but when I ask them why they don't do it for a living, they say they don't want to ruin it for themselves. That is sort of what catering does for people who love to cook recreationally.

That said, I agreed to cook some food for an event this weekend. It was a charity thing and I know a lot of good people who work for this organization, so when I was asked to bring a few dishes for people to sample at their event, I jumped at the chance to help them. And it was fun, in the way fixing up a '57 Chevy is fun for the weekend gearheads I know. When you get to do something like this for fun and for the love of the project, it's totally worth the effort. Also, I have nice people around me who agreed to help and drink wine with me in the process.

I made several dishes, but our favorite to make (and eat) was by far the crabby balls. I had decided that I wanted something from the sea, and it had to be something that transported and reheated well, and I thought it would be easier to fry a bunch of small balls than to try to do a lot of larger crab cakes. They turned out fantastic, but possibly better than the balls themselves was the aioli I whipped up to go with them. Mr. Meat and Potatoes has requested that I make a jar of it to just keep on hand for sandwiches, or just sticking our fingers in once in awhile.

We made about 150 of these balls, but I am paring down the recipe for the home cook who doesn't want to die of crab ball attack. I can't think of what else to call them, but Crabby Balls by Crabby Patty. Sorry for that. 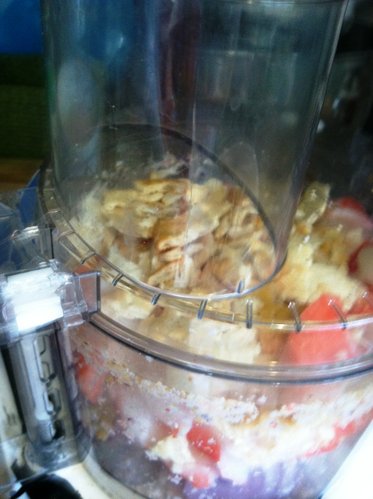 First, put the crab, crackers, and onion into a food processor (you might have to do this in two batches) and process until it's all crumbly and mixed together thoroughly. 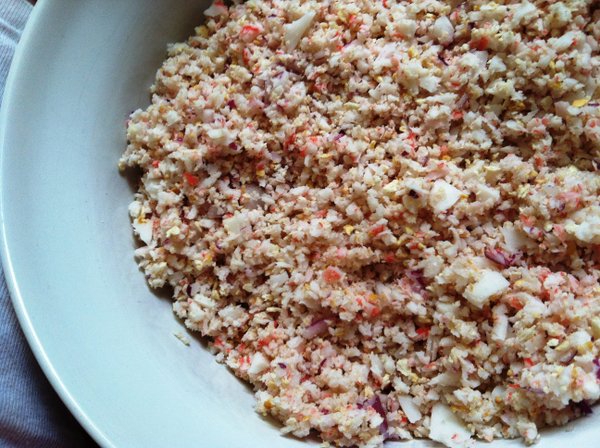 Transfer it to a large bowl and add in the rest of the ingredients, and stir it all together thoroughly. Form into tablespoon-sized balls. 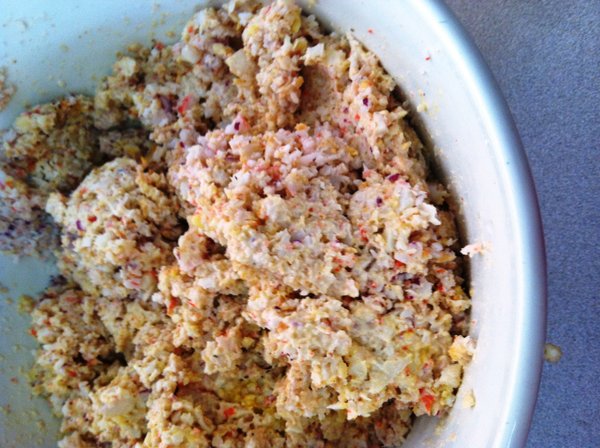 This next step is very important. Do not - I repeat - DO NOT try to skip it. Freeze them. Freeze them for several hours until they are solid. Don't skimp - it won't work if they get at all warm.

We fried ours in cast iron in canola oil. The cast iron, insisted upon by my friend Adam, was important. It keeps the heat even which fights against the coldness of the balls. Drop them in the hot oil and gently roll them around with tongs to ensure even browning. Be patient.

Remove them to a plate covered with a paper towel or newspaper to absorb the excess oil. Eat them fresh and hot if you can. HEAVEN.

But if this little bit of friend goodness isn't enough, add to it the aioli. Yes, I know, it's not Weight Watcher friendly, but I was cooking for people other than myself and my family, who are used to my new habits. This was for the hungry masses, and fried speaks to all of us. My husband walked in shortly after we finished cooking and opened the freezer and pronounced it glorious that his garage beer fridge smells "like FRIED." Sometimes, you just gotta have it.

For the aioli, keep it simple.

Stir this all together. Die.

For the roasted garlic, heat the oven to 425 degrees. Peel cloves from two heads of garlic. Line a baking pan with aluminum foil (you'll regret it if you don't). Toss in a tablespoon or so of olive oil, and pop it all in the oven for 25 minutes. When it comes out, while it is still hot, remove it to a ceramic plate and use the back of a fork to mash it up. I remove any hard casings that don't mash in. Taste. Cry. This stuff is what makes me want to get up on Monday morning. This is what true love tastes like. This is nature's kind gift to us, even though we're terrible.

I know I'm dieting, and I know fried crab balls aren't exactly on the approved list, but once in awhile, and without over-indulging, they are worth it. I don't waste "splurge" points on just anything. I don't eat fast food or even crave cake. But this? This, I will save points for and eat nothing but broccoli for dinner in return. 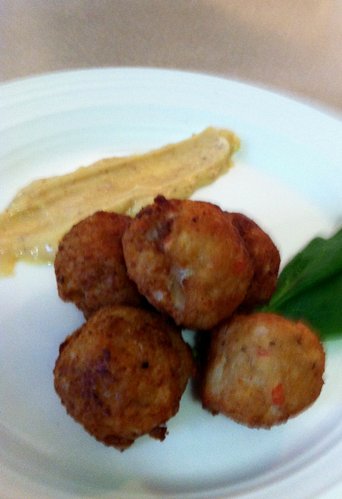 Show stoppers. Serve them at your next party. Please do it. For me.

These sound amazing! FYI, imitation crab is on sale this week @ HyVee. I posted this and other grocery deals for this week on my blog: http://frugaltownie.blogspot.com/2012/04/grocery-deals-425-51.html