Dieting during March Madness is akin to listening to Nickelback while smiling. You just almost can't do it, no matter how hard you try.

March Madness brings watch parties, bars, beers and bad decisions. Throw in a little St. Patrick's Day revelry and you've got a recipe for Weight Watchers disaster. I am determined to not let this be me. I know myself: If I fall off that wagon for more than one meal, I'm doomed. Permission to fail for a weekend will turn into permission to fail for a week and the next thing you know I'll be all "What? Weight Watchers? Never heard of it."

So I'm compiling a bunch of recipes that will hopefully get us through watching the games if we can just manage to do it at home or a friend's house, instead of in a bar that serves nothing but fried chicken wings and bowls of cheese.

For example, you might want to take a gander at these wasabi mustard chicken legs which are taking the place of wings in our game night lineup.

And, you might want to take a close look at my Southwest Turkey Tater Skins, which, even according to Mr. Meat and Potatoes, are the straight up bombdiggity. And, they're fast and easy, which is good when you are really more interested in parking your tookus on a couch and screaming at the TV than you are slaving in the kitchen by yourself.

First, bake your potatoes. I'll be honest: I did mine in the microwave for about ten minutes.

Then, spray a cookie sheet with cooking spray, and cut your potatoes in half the long way. Scoop out as much of the potato as you can, and reserve it for another meal.

Next, spray the potato "boats" with cooking spray (I like the butter flavor stuff for this), and pop them in a 350 degree oven for about six minutes, just long enough to get them a little crispy and firm.

In the mean time, brown the meat and drain off the fat (there shouldn't be much). Then add the whole can of Ro-Tel, and the rest of the ingredients. Stir over medium heat until everything is warm and all the flavors are combined - about 10 minutes. 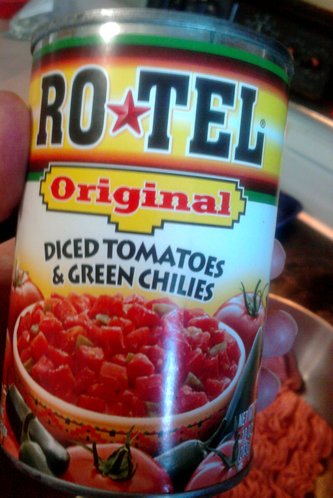 Then fill the potato boats with the turkey mixture, top each with a tablespoon or so of cheese, and pop back into the oven to warm for about three or four minutes.

You could put some bacon bits on top, or diced tomatoes, whatever you like. I just did a little sour cream, green onions, and cilantro. 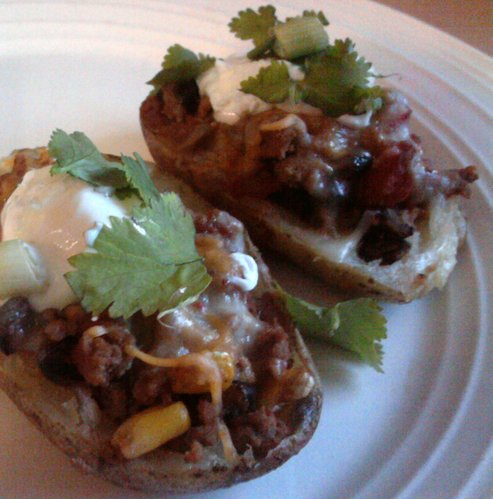 This recipe is man-pleasin' fun, and easy to make and eat. It also represents "bar food" in a way that makes you feel like you're not forgoing the March experience, but you will still get to wear your skinny jeans to rush Mass Street after the championship game. And there will be a championship game.

Another great recipe! Thanks!

Sorry for the lack of photos... my phone died - she whom I had used to snap the photos. I'm still trying to retrieve everything.