The Heard - The Casualties

"Hey, so do you guys know where the nearest gym is?"

Okay, so this isn't twitter, but I have become obsessed with ridiculous hash tags that function less as trending and more as punch lines. Either way, I think you get the point. My experience with Jake Casualty was incredible, spontaneous and unforgettable. For the guitarist of a band that has so much attitude and has done so much, Jake was the nicest dude on the planet.

As Jake explained to me how the band pushed through the first few years, I realized the true meaning of "punk". Often times, "punk" is lumped in with the "slackers". When in fact, the Casualties are the exact opposite of lazy. Since the formation of their band, the Casualties have been one of the hardest working groups in the business. There is no mistaking the level of dedication that the Casualties have to not only their music, but their fans as well. Jake told me about how he would work faster than all the other kids in his high school graphics class just so he could use the spare class time to print band t shirts on the school equipment. Seems to me the punk slogan should be, "f*ck the system, take every advantage you can from it, then rub it in their face by being a bad ass"... at least the Casualties have been doing so for the past couple decades.

Aside from being super motivated, Jake was also extremely genuine. When the interview was finished, Jake asked if we could point him in the direction of the nearest gym. Instead of sending him on a wild goose chase, we decided to give him a lift. On the way we discovered that he was originally from Jersey, thus, a fan of the Jersey Shore. I mean, we were taking him to work out. However, tanning probably is not too good for his tattoos and being in a punk band does not always require clean clothes. Needless to say, Jake was not ashamed of his roots. At first I thought it was crazy that he worked out before every show. Later that night, I realized that due to the speed of the Casualties playing, it was probably a good thing Jake was a fitness nut.

As I stood shoulder to shoulder amongst the crowd, the band members began to chant, then eruption from the pit reciprocated the chant. The roar of the masses was terrifying. I fully understand why any authoritative figure despises and/or fears punk music. I felt as if the Casualties were preparing for war, alongside hundreds of troops... I mean fans. The idea of a bunch of angsty kids uniting even frightens me, and I am by no means in any position of power. Even being relatively new to the Casualties music, I understood the gravitational sense of belonging and brotherhood that the Casualties fabricate. Well, now that I say fabricate, I don't feel as if it is by any means artificial or fabricated. Desiring to be apart of something is human nature, it is an emotion that is instilled in every being. Some bands, like the Casualties, are just incredible at pulling that feeling out of a horde of people.

I recently purchased the Casualties live record. Instantly, I could feel the same emotions just from hearing the roar coming from the crowd on the recording. Love, fear and hate are all words that have at some point been attached to the Casualties music. Even though these are not all typically positive, all that matters is the fact that the Casualties provoke genuine emotion.

I'm not surprised, but I never feel quite prepared -

[Followers of the Heard -

We have a little extra sauce for you this week. Stick around for an impromptu performance from Little Teeth at the bottom of the page, after Nick's blog.

Also, if you have some time, check out Little Teeth's Kickstarter page! http://www.kickstarter.com/projects/littleteethmusic/little-teeth-to-record-sophomore-album

My experience with Little Teeth cannot easily be described within the restraints of the english language. If I had to attempt to sum it up, all that comes to mind is cluster f*@#k. I say that with the upmost respect and admiration. The three San Fran gems that make up Little Teeth are quite possibly the strangest musicians I have come across in a very long time. I do not even know how to justifiably discuss their music. Everything they did was so... raw.

While watching Little Teeth perform, I felt like I was apart of the music. It truly was an experience that overcame my entire body. The noises coming from the stage evoked feelings that I never thought possible from an outside source. Strange is an understatement: foreign, bizarre, beautiful, disgusting, vulgar and enlightening might be close to an accurate synopsis. Just from witnessing Little Teeth set up their instruments, way too many to count, I could tell I was in for a crazy adventure. Sean's drum set was a combination of your standard drum kit and a make shift ensemble of pots and pans. Ever since I was little I would bang on pots and pans, this got me so stoked for their performance.

During their set, the drummer, Sean, actually left the stage with a small bells kit. He ventured back behind the audience to perform. Little Teeth had completely encompassed the entire crowd. Looking around, I could tell that people did not know what to think. Some seemed excited, others, a bit awkward. Either way, it drew some sort of emotion from every person in the venue.

For their final song, all three members of Little Teeth ventured out on to the floor of the Replay to perform an a cappella song. As they sang, growled, howled and hummed, the crowd crept in closer and closer. The mass nearly swallowed the performers leaving only a small ring of space around the trio. Chills were ravaging my body. It would be hard for me to imagine other people in the room not feeling the same shivers of excitement and nerves. Little Teeth dug up feelings and emotions that I did not ever conceive possible. I urge each and every one of you to brave the storm and experience, not listen to, Little Teeth. Love it or hate it, there is no denying its power. 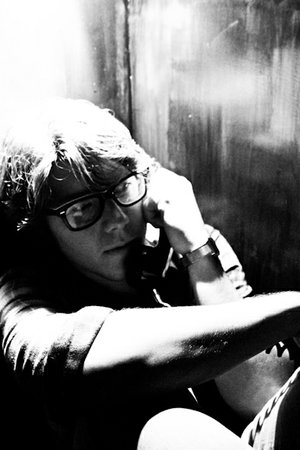