The day of reckoning is upon us. Tomorrow morning at 9:00 AM CST, hosts South Africa open the tournament against Mexico in Johannesburg. At the same moment, roughly 9,000 miles away, my jeans will be officially creamed.*

I'm done with anticipation, I'm done with predictions. I'm done with telling all you little lemmings how to feel. Tomorrow is the culmination. I've been waiting for this moment for 300 years.**

Think of the next month like a final exam. That one girl in your class (you know, the annoying one who sits in the front and calls the teacher by her first name?) has been studying all semester. She's got her flash cards, her itemized hi-lighter notetaking system, her self-made podcasts and has met with the teacher once a week to discuss the supplementary reading that no one is required to do, but she does. What. A. Bitch.

And then there's you, downloading the lecture outlines off the internet the night before the test, but finding yourself distracted by the fact that there's a Jurassic Park marathon on TBS, and even though you've seen the first one like fifty times, you've never gotten around to watching the one starring William H. Macy. At around 9 o'clock, you remember that you're friend's ex-girlfriend took the same class last semester and that she does really well in school. You pull her phone number off of the Facebook, and call her up.

After asking how she's been and saying that you should hang out some time (which doesn't fool either of you), subtly, at the end of the conversation, you ask if she could email you her notes. She's always kind of hated you but still has a thing for your friend, so she obliges. It's now 10 o'clock, and you have roughly fifteen hours until test time. You sit down on the couch with the printed out notes and turn on the TV. Sam Jackson flashes on screen.

Hold on to your butts.

In the scenario above, I am that ex-girlfriend. If you're still not ready for that final test tomorrow, never fear. I made this cheat sheet for you.

Ubuntu in the Rainbow Nation! No host nation has ever not advanced to second round in the history of the World Cup. Uruguay is dangerous, Mexico are evil and France are a bunch of cheating cheaters.

This group is tougher than it looks. Argentina advances in first place, while the rest of the group dukes it out. Nigeria is bipolar, South Korea believes in UNITY and Greece only knows how to play defense.

Dear Entire World: The United States is going to drink your milkshake. England will underachieve, Algeria will foul and Slovenia is not real. WE DRINK IT UP!!!!!!

Europe rules the day in Group D. Everyone hates Ze Germans and you should too, but they'll advance. Australia is old and slow, Serbia makes the Belgrade (pun!), while Ghana is limping into the tournament.

Italian is the second worst Romance Language; too bad they'll cheat their way into the second round. Paraguay means Of the Guay, New Zealand gets a participation medal and Slovakia has TechnoRaveHair.

Three of these things belong together. Expect five time World Cup winners Brazil to finish in first. NorKor will get gangbung,*** Portugal could defy gravity by diving into the second round and Ivory Coast is a mystery now that Drogba is injured.

The Spanish side is a pretty much sex on a stick. My non-American favorites will finish the group in first. Switzerland will crash and Bern (second pun!), Honduras will powerbottom and Chile will [insert socially conscious earthquake joke].

We can make the quarterfinals. I honestly believe this. After finishing second in Group C, we'll backdoor a wounded Germany before losing out to The Flea in the third round.

My prediction for the semi-finals are Spain vs Argentina and Serbia vs Brazil, with Spain and Brazil advancing to the final match. 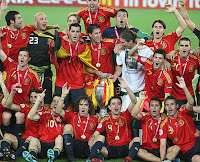 Spain. They're playing insane football at the moment. Did you watch the game versus Poland? Sheeeeeeeeeeeeeiiiiiiiiiiiiit.


So, there you have it: As succinct of a primer as I can provide. I'm ready. So ready.

Finally, if you're a working (wo)man, here's an article with a list of websites that will be streaming games on the internet.  You can say thank you later.

*Unless you're into some really weird shit, I would NOT suggest putting the words "cream" and "jeans" into a search engine together. You will find a topical website. It is not a pretty website.

** 300 years, you ask? Yes, it's true. I'm actually even more emotionally involved in a tournament of a different sort, one called "The Quickening."