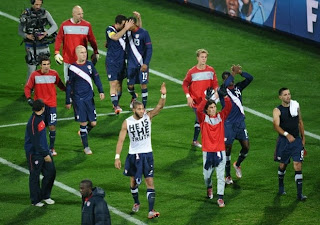 Oh, we're in it now.  I can only assume that Gooch's shirt is referring to the ethereal, transcendent talent that is Tim Howard.

South Korea (aka The Same Names) versus Greece (aka The Pirate Ship) completely defied my expectations.  It.  Was.  Awesome. 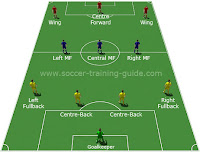 Greece came out in a 4-3-3 line up, and totally blew my mind.  For those of you who aren't aware, they usually play with 12 goalkeepers and 46 defenders, so busting out three forwards was an XXXtreme departure from their typical formation.  In my previews of this match, I've made it very clear I thought this was going to be a case of boring playing boring.  Instead, SoKo scored in the the seventh minute, and from then on, the game was wide open.

South Korea deserved the win.  In addition to the obvious fact that they scored more goals, the SoKors controlled the ball, were clever on the attack and defended decently enough to keep Greece below them on the score sheet.  That's not to say that Greece didn't create chances.  By my count, the score could have ended something like 5-3, in SoKor's favor.  Ultimately, the Greeks were uninspired, and the nicest thing I can think to say about them is that their beards were very nice.*

A 2-0 victory on goals from Lee Jung Soo (7') and Park Ji Sung (52') was a great start for the South Koreans.  The confidence from this victory will serve them well as they take on the toughest team on Group B,  Argentina, in five days time.

And Greece?  Well.. yeah.  Thanks for playing.

Vincent Enyeama was the man of the match, despite being on the losing side.  The Nigerian goalkeeper turned a match that potentially could have ended 149-2 into a 1-0 contest.  Check it out for yourself, though I would suggest turning down your sound, first:

I guess, as you've now seen the highlights from the match, I don't need to describe it.  BUT YE GODS, ENYEAMA!  WHERE DID YOU COME FROM?  NIGERIA?  OH, I SHOULD HAVE KNOWN THAT.  There was absolutely nothing he could do about Heinze's SICK header, but everything else that came near his goal, he palmed away.  Great performance. 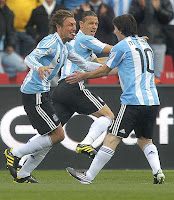 Argentina deserved to win, but they seemed a little too open in the back for me to see their team going extremely deep in the tournament.  Nigeria looked about like I expected they would.  They're missing a bit of class thanks to the absence of Obi Mikel, but with a win against Greece, they could still find themselves with everything to play for in the final match of group play versus South Korea.

In the month leading up to USA vs England, I honestly had no clue what to expect.  Any number of scenarios made sense.  I could see us winning by two goals, losing by four, drawing 0-0; I could even see Wayne Rooney and Landon Donovan suddenly announcing they were life partners and having a Commitment Ceremony in the center circle.**  But despite all my prognosticating, nothing could have prepared me for what actually happened. 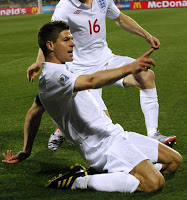 When Steven Gerrard scored, I was actually on the phone, speeding back to my house from a stupid, mandatory job training class I was stuck in all morning.  I was almost home, tearing up Iowa when it happened, and I screamed "FUCK!" into the phone roughly 30 times.  I threw open my front door and turned on the TV, rewinding the recording to watch the play, and added a 60 additional "FUCK!s" to my tally.

Minutes went by.  I squatted on the couch, too nervous to sit down.  Something funny was happening.  We were controlling the ball (even without Jose Torres on the field), we looked dangerous, we looked the better side.  I blinked a couple times to make sure.  Then, this happened:

I would like to go on record as having said that I feel bad for the guy.  He's normally a very good keeper and I thought he deserved the start over David "The Intellectual" James or Joe "Super Twink" Hart.  That doesn't mean I want to give the goal back, though.  No way, no way, no how.  For levity, check out Beckham's reaction to the blunder from the bench: 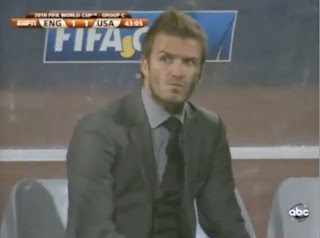 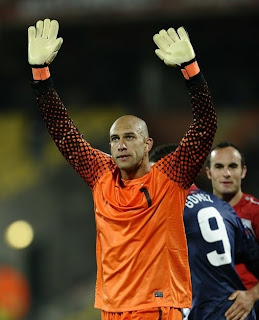 USA Bright Sides:  Onyewu vindicated himself completely.  Altidore looked fit and reasonably classy.  Cherundolo was ageless.  Michael Bradley was poised.  Dempsey played solid defense. Tim Howard was amazing, and by amazing, I mean absolutely insane, and by absolutely insane, I mean I want to marry him forever and ever amen.

As the halftime whistle blew, I rushed out the door and drove downtown to finish out the game at Dempsey's (DELICIOUS BURGERS, FYI) with a couple of friends.  The second half was extremely tense, with both teams having a coupe legitimate chances to take control of the score-line.  The game ended at 1-1, which felt like a win for the US players and fans.  I can't definitively say how it felt for the English, but judging by Rooney's angryface, I'd say they were experiencing the other side of the coin.

Let's be real:  I'm almost certain both of these teams are going to go through to the second round.  England plays Algeria next, and I expect it to be a bloodbath.  So, don't worry you limey fucks.  You'll be okay.****  The US battles Supposedly Slovenia on Friday, and though it will be tight, I think we'll win 2 or 3 to 1.  The group winner is going to come down to goal differential, and while I think England still has the edge in that department, maybe the US will sneak past them.  That would be HILARIOUS.

*There was one other thing I noticed about the Greek side:  They wear the tightest shorts of any team I've seen so far.  That, or they all have gigantic asses.  Seriously.  Is that a thing, a stereotype I've just been unaware of, up to this point in life?  "All Black women and also Greek guys have back."  Weird.

**Which one's the bottom?