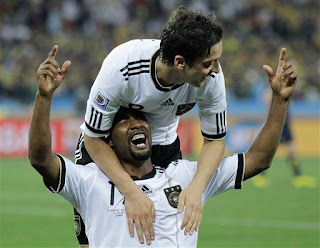 Somebody finally scored some goals.  Too bad I hate their guts.

After the USA and England tied yesterday, I made a firm pact with my brain to wake up early and watch Slovenia* vs. Algeria, the second match from Group C.  My alarm went off at 6:15 AM, 6:21 AM and then 6:25 AM, but I stayed in bed.  I'm glad I did.

There is nothing worse than waking up at 6:30 in the morning to watch a terrible soccer game.  Instead, I slept in until around 9:00, got up, threw on a shirt and stumbled out to watch the recording.  While my change in viewing time didn't make the game any less boring, at least I was more rested.  Here's my version of what happened:

Teams walk out of tunnels.  National Anthems.  Kick-off.  Slovenia are wearing sweet jerseys.  Boring passing for 45 minutes.  Halftime.  Kick-off.  The Algerians have a lot of stupid dyed hair.  Some dude gets subbed on and immediately gets a yellow card.  More boring passing.  Same dude who just subbed on gets another yellow card for grabbing the ball out of the air with his hand.  Said dude gets a red card for getting two yellows.  Idiot.  More boring passing.  Robert Koren scores a super weak goal by doing his best Clint Dempsey impersonation.  Algerian goalkeeper extremely embarrassed.  Game ends 1-0, Slovenia.  I want to die.**

How can a game with a goal be less exciting than a 0-0 tie?  Watch the goal, and you'll see why:

BOOOOOOOORRRRRRIIIIIINNNNNNNG!  Slovenia may be currently leading the group, but trust me:  After they play the US on Friday, that's all over and done with.

When I learned that Michael Essien would be kept off Ghana's World Cup squad, I quickly wrote the team off.  That was a mistake.

If you're more than a casual fan of soccer, Serbia vs Ghana was the feature on today's schedule that carried the most implication for how the whole tournament will shake down.  The Serbs had stormed through European qualifying, mostly due to their monstrous defense.  They looked to be a tough side, and in one scenario, I could legitimately see them reaching the semi-finals of the tournament.  Despite that, I had originally chosen Ghana as the team that would qualify from Group D behind Germany, but when I learned that Michael Essien would be kept off Ghana's World Cup squad, I quickly wrote the team off.

That was a mistake.

The entirety of Ghana should buy Kuzmanovic a beer for being a complete idiot. 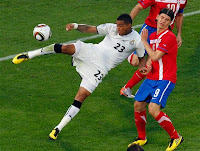 Doing well in a World Cup will always involve a healthy amount of skill coupled with a dose of luck, and Ghana had both today.  Beyond that, I think they deserved to win.  Does that mean I don't think the game could have ended differnetly?  Yes.  If the lanky Zigic had finished his best chance, it definitely would have.  What the video above doesn't really show you is how Ghana absolutely controlled the midfield all game long.  While Gyan may have scored the goal, Asamoah and Prince-Boateng were the men of the match, by my estimation.  They played the ball with the outside mids in small triangles, springing runners into space down the wings.  Serbia couldn't find the answer.

Ghana's win might be indicative of the power a team can draw from playing on "home soil."  This is the first African tournament, which has to mean something for the players, even if they come from a West African nation.  With their next game against a reeling Australia, the Ghanaians could find themselves already qualified for the second round by the end of a second 90 minutes.

In the final game of the day, Ze Germans thrashed poor old Australia 4-0.  It's no small secret that I hate Germany (in the soccering sense).  They are my fourth least favorite FIFA nation, behind Italy (1), Portugal (2), and Mexico (3).  This game made  my heart sad.  The tournament, to this point, had been a relatively low scoring affair, so on the one hand, it was nice to see some action, but on the other hand, poop.

Germany beat Australia because they were the better team.  They passed, shot, defended and moved off the ball in a superior manner.  I don't really think I need to analyze it in any more focused of a fashion than that; no need to rub salt into the Australians' wounds.

I do, however, feel a need to weigh in on the Red Card issued to Australian midfielder Tim Cahill for his tackle on Bastien Schweinsteiger.

Mexican referee Marco Rodriguez just plain got this call wrong.  I know there are a lot of players and fans out there who unabashedly talk shit on referees when a call goes against a team that they're rooting for.  It makes being a referee incredibly difficult.  I swear to you that I'm not one of those people.  Other than this call, he had an excellent match.  He correctly awarded cards to two players for diving, as well as refusing to blow his whistle when Germany inadvertently handled the the ball in their own box.  But this call is bad.  Really bad.

According to FIFA's Laws of the Game: 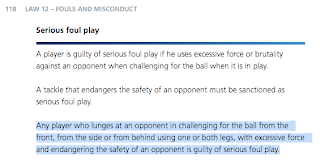 The key phrase in that ruling is EXCESSIVE FORCE.  Watch the tackle again.  Is there really excessive force?  No.  Not only does Cahill tuck his legs up to avoid spiking Schweinsteiger with his cleats, but he's not coming in at a dangerous speed or (and I'll admit, this is debatable) from a dangerous angle.  It should have been a yellow, no doubt, but a straight red on this tackle is extremely harsh.  Even the man he tackled thinks it was undeserved.

Tim Cahill is a likeable player.  To his credit, he did not verbally assault the referee after the call and respectfully left the field, even though it was quite obvious he disagreed with the ruling.  If he misses out on the rest of his team's games in the group, it will be very unfortunate.

Ze Germans are in the driver's seat for the rest of this group.  They take on Serbia in their next match, and unless the Serbs can muster a total turnaround, I expect Wonder Dwarf and Company to take all three points.

Shit happened.  I was happy about some of it. Referees are good and bad.

Tomorrow's matches open with Netherlands vs Denmark in the early game/low-lying-country-off.  Expect the Danes to be exposed as the pretenders they are.  Nicklas Bendtner may or may not keep his pants on.  Enthralling.

Up next, we'll see Japan against Cameroon in a match that I'm pretty sure will feature at least four goals, if not forty.  Japan has looked exciting in their warm-up matches and Cameroon was last seen losing 4-3 to Serbia.  We may finally have a rollicking match on our hands.

The final game on Monday features the Pure Evil of Italy versus Paraguay.  Pray that Italy fail-fail-fails.

*Slovenia is still not a real country, but I'll go ahead and pretend like it is for the sake of my analysis.

**Slovenia did do a pretty sweet group-dance-rain-maker celebration after they scored.  Me likey.

Damn, FIFA's all over the youtubes taking those clips down pronto. Really too bad since they evidently haven't seen fit to post their own clips or highlights. And how is it they can't broadcast the games in 20friggin10 on the internet? NCAA has been streaming live games simultaneously for years now—many more games than the World Cup at that.

Fantasyland or no, this video definitely captures the spirit of the greatest sporting event out there: http://youtube.com/watch?v=idLG6jh23yE

If you're searching for highlights and recaps, try MetaSocerVideoSite FootyTube.com. ESPN also has highlights from their clips shows available on their YouTube account (http://www.youtube.com/user/ESPN), but they have disallowed embedding, much to my chagrin.

Finally, in sharp contrast to the bombast of Nike's main ad for the tourney, check out Puma's contribution, my vote for the best commercial of the World Cup: http://www.youtube.com/watch?v=vAX1UC...

You're totally write about that commercial—somehow WAY better...it has a lot more soul than the Nike joint~