There is some justice in the world, but not as much as I'd like.

For today's wrap up, I enlisted the help of a GIRL, my grood friend Jess Wdowiarz, who was kind enough to talk with me about soccer through the classiest of mediums: Facebook Chat.

ZGS: How early did you have to get up to watch Netherlands v Denmark?

Jessica: 8:30am I watched it on replay cause I can't stand getting up early.

ZGS: You're an inspiration to us all. I got up at 6:15 CDT. Or is it CST? I can never remember. Any lasting impressions of the match?

Jessica: I thought that Netherlands look really strong, and I'm glad that they kicked the Danes' ass. I feel like two countries that have insane architecture and last names should have to duke it out. only one can go on.

ZGS: You weren't, I don't know, BORED at all by the game? Or was that just a function of it being ass early for me?

Jessica: No, you weren't missing anything, it was a boring yes it was early, but also neither teams are known for their creativity. it was generally a stale mate into who would just score, and then defend until the whistle blew

The 2-0 scoreline for the Dutch isn't as great as it sounds. For the short time he was on, Bendtner actually had a very decent game, dribbling and distributing well, and the Danes looked like a bit of a threat. I'm not so sure the Netherlands would have broken the deadlock if it hadn't been for the Danes' unfortunate own goal. Way to be in the wrong place at the wrong time, Daniel Agger. Though I still believe the Oranje will qualify at the top of their group, unless they pick up the pace a bit, I don't see them making it too far past the second round.

ZGS: Okay, okay. Your opinion is your opinion and I can't change that. What about the Announcers' Nightmare Match, Japan v Cameroon?

Jessica: haha I had to watch it with the sound OFF

Jessica: I was at work and was on client calls all day long. why was it the announcers' nightmare match?

ZGS: Because they can't pronounce any of the players' names. Have you ever heard a British person try to say a Spanish name, let alone a French or Japanese one?

Jessica: Yes, it is absurd. although, since Honda scored, I feel like they got a gimme. its like every first day of school for me - fucking practice that shit before you go in front of a crowd.

ZGS: I couldn't say Wdowiarz for about 6 months.

ZGS: It's because he ruined his mouth [insert false innuendo about him engaging in fellatious acts]. Back to the game. 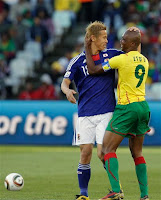 Jessica: I was disappointed with Eto'o.

Jessica: he's their star and I hoped he would have played a more significant role he was practically nonexistent I want an African team to go far - and it was either Ivory Coast (who is now down Drogba) and Cameroon and if Eto'o can't convert into goals, then BOTH are screwed

ZGS: I tend to blame the coach. He had Eto'o out on the right wing, for some reason. It was hard for him to get in the play. IF Eto'o has to drift to the wing, he prefers the left, so he can cut in and shoot. None of it made any sense.

Jessica: I totally agree. All in all, I think Cameroon could do well, but you're totally right, they didn't optimize their talent.

ZGS: Any plaudits for the Japanese?

Jessica: I wouldn't say that I enjoy their style of play, but I think their goal was great and I also thought that their skills were well executed that's it though I honestly am completely biased because they are all named after cars and you're post about them looking the same, with exception to hair-dye guy, really stuck in my head and that's all I can think about when I see them play now.

The Japanese played like a bunch of men today. Their fans were a different story. No bones about it, I was rooting against them, but I have to give credit where credit is due. A 1-0 victory serves them well. Cameroon looked disjointed for most of the game, though it took a bit of luck to keep them off the score sheet with Mbia nearly shattering the foundation of the earth as his drive hit the bar, as well as a great last minute save on Souleymanou's redirection towards the net. Last tournament, Ghana lost its first game to Italy before knocking out two wins to advance, so there's still precedent/hope for the Indomitable Lions. Barely.

ZGS: My racism is infectious. Good to know. Alright, what about the last match: La Allbiroja v Los Fuckfaces?

ZGS: The Fuckfaces are Italy, in case that wasn't clear.

Jessica: You know what makes me so happy about that game?

Jessica: Italy was fucking LUCKY to come out with a draw Paraguay played a GREAT game.

ZGS: Yeah, Paraguay's goalie pretty much gave them the point. Too bad.

Jessica: they were really solid looking, and they shoved in their dolce & gabbanna faces

ZGS: Imagine what would have happened if Sant Cruz was fit or Salvador Cabanas didn't get shot in the fucking head...

Jessica: I know right? I'm so pissed that Italy tied up the game and Paraguay's header was such a great goal 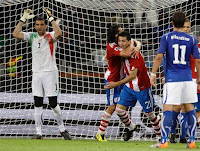 ZGS: Part of that was the rain, but most of it was their suckitude. Compare your hatred of Italy to an international conflict.

Jessica: Good question. My hatred of italy is like all the shit that went down in the Phillipines, with Imelda Marcos. Italy is the biggest bunch of patsies ever, they never accomplish anything (last world cup), and when they do its pretty much because the they insulted Zindane's sister. You might as well just kick someone in the testes. They dive all over the place, rig matches, corrupting their referees.... and yet they manage to squeak by. Finally, when someone decides to investigate, you find out they have 10,000,000 shoes in their closet, and kill all their countryman

ZGS: Don't forget their stupid faces. And the fact that they are satisfied with 1-0 victories.

Jessica: its like... the LAST straw you find the pile of shoes, and FINALLY realize their ridiculous extravagance and how much you underestimated them in their evilness 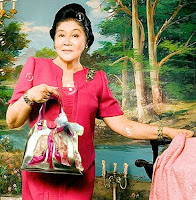 ZGS: Is the shoes thing a reference I should get?

ZGS: I don't believe in Southeast Asia, so I'll have to look that up.

ZGS: Jesus. That's some woman. So, final thoughts on the day's games?

Jessica: Overall, I've seen better, more exciting play, but my overall take is that this World Cup is completely unpredictable. I was really suprised with the scores, and whether it's the ball, the rain, the injured players, the heat or the country, whatever it is, I'm really excited to keep watching, cause I feel like anything could happen.

ZGS: It's good to see your glass is still half full.

ZGS: Thanks for the help. Goodnight. You're a Princess among Thieves.

This was a sloppy game. Sloppy, sloppy, sloppy. I'll have to wait for tomorrow's early game to form an opinion on how the rest of the group is going to shake down. Maybe Slovakia and Paraguay advance? Cross you fingers. During the game, Paraguay had a special talisman in the stands that I expect will bring them luck for games to come. Everyone loves excessive tatties, right? Right.

The Slovaks should roll, but after an impressive warm-up win against Serbia, the NewZies may have a few surprises in store for us. Here is an unnecessary Flight of the Conchords video to pump us all up:

Will Drogba play? Will CRonaldo not play like a douche? Will all that shit in the Nike ad come true? I have no clue what to expect. I really hope the Coastal Ones pull it out. Innuendo.

Brazil 96, NorKor 0. I couldn't imagine a better opener for the 5 time champions. Sheesh.