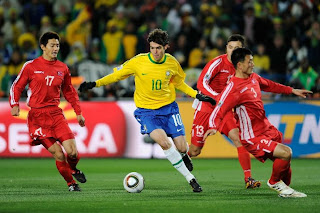 It's a difficult debate: Do I prefer being right or happy with the results of today's games?

Theoretically, New Zealand faced off against Slovakia in the first game of the day, but I know better. It was Birds vs Draculas. You'd think that would be a pretty straightforward match-up, what with a Dracula's immortality and all, but it turned out not to be so simple.

Sidenote: How the Draculas managed to play a day game is a mystery far beyond my mental reach. It scares me. When I was a kid, my older brother locked me in the basement and told me that Dracula lived under the stairs and was coming to eat me. I have not had a good relationship with vampires ever since. I'm actually OK with that. Don't judge me. 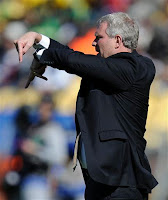 For the first half of the game, the Bird's coach was the most interesting thing to watch. The hand-based freak-out gesture you see on the right is only one of his seemingly endless array of spectacular histrionics. Play in the first half seemed pretty even (if by even, I meant boring), with the Draculas having the slight edge in chances and possession.

There was not a great deal of ground-based passing to be found in this match. It seemed like very time I looked up from my cereal, at least 15 out of the 22 players were soaring through the air. This makes sense, as flying is pretty much Birds' bread and butter, while Dracula is well known for his powers of levitation and stuff. Given their natural talents for aerial maneuvers, it was only logical that both teams produced their best chances from crosses. 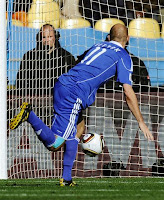 After the break, some Dracula named Vittek headed in Slovakia's only goal of the match. It was a decent ball into the box that he classily nodded past the rooted Bird goaltender. I was expecting the Draculas to win this match by a comfortable margin, so I assumed that this header was the first in a series of two or three goals I would see over the second half. This is not to say that I wanted the living dead to win the game; I was rooting for the Birds. I just didn't think they had a realistic chance.

It turns out I was halfway wrong. In the 93rd minute of play, fancypants Bird player Shane Smeltz spun in from the left sideline and served a desperate ball into the box. Winston Reid timed his run to perfection, flicking the ball off the back post and into the net. The game was tied. Pandemonium ensued. 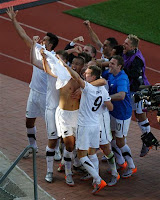 The Birds players all hugged each other and got naked and shit. Winston Reid screamed joy screams in his funny accent. I texted eight people the phrase "HOLY FUCK." This was beyond comprehension. Upon qualifying for the 2010 World Cup, I was certain the the New Zoolanders wouldn't even score a goal, let alone manage to earn a point in the group standings. 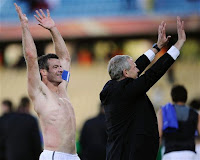 Though they face an even tougher and more evil opponent in their next match (Italy), who knows what to expect from these plucky Kiwis? I'll be rooting for them as hard as I know how. For the moment, captain Ryan Nelsen will be satisfied to lead his team in thanks and praise for J.C. and whatever Maori gods I refused to learn about in social studies they're into.

Portugal versus the Ivory Coast began with both teams implementing their favorite ways of posing for a photo. Portugal went for the Glamour Shot featuring Minor Inappropriate Touching, while the Coastal Ones went for the Staring Into Space Senior Picture. Both teams looked incredible.

The two stars of the match wore their training jackets with great pride but to much different effect. Cristiano Ronaldo, despite not having a mirror handy, winked and bit his tongue in such an intense, sexy manner that it beamed all the way around the circumference of the earth so, ten seconds later, he could see how good he looked. What skills! What amazingly douchey talent! 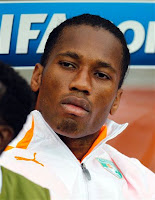 Didier Drogba gave us the stoic stare of a man supremely confident is his ability to sit injured on the bench while still remaining the ultimate focus of the game. Though his elbow kept him out of the starting line-up, there was no way the Ivory Coast's talisman would not see the pitch in their first game. For the moment, he was content to watch through slitted eyes as Solomon Kalou and Gervinho served as place-savers for his inevitable greatness. What poise!

Gervinho (number 10) actually had a really great game. In Drogba's absence, he was the game's greatest offensive threat and his weaving runs were quite impressive. Before this game, I had only read about his play, and it was quite enjoyable to watch his talent on display. On an even more personal note, his hair is fucking incredible. I am still not sure what's going on there, what with all the braids, headbands and five-heads, but I do know that I LOVE IT.

Cristiano Ronaldo, on the other hand, spent most of the game on the ground. Are we really surprised? He had one good shot that stung the upright, but that was pretty much the sum of his offensive output. Assuming I still have the ability to count, I'm pretty sure CRonaldo faked a foul every third time he got the ball. That's just completely ridiculous. I hate the way he plays times one thousand. In today's shot of irony, the one time he actually got hit hard, he ended up getting a yellow card for his reaction. As for the dives? According to the referee, "What dives?" 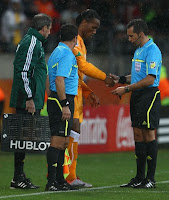 In the nth minute, Drogba finally got on the pitch. The referee was so excited, he felt the need to shake the big striker's hand and stare lovingly at his crotch. That, or he decided to check the cast on the Savior of African Football's elbow. Did I mention Drogba was injured? Did I mention how miraculous of a man he is? Did your English teacher explain hyperbole in class? Just checking.

It turns out Drogba had the best chance to score for the Ivory Coast in the second half. Running on to a slotted pass with a few minutes left to play, he slid into the the ball with his left foot, sending it across the mouth of the goal in what I can only pray was a pass to someone he thought was running on. If that was a shot, I'm a little afraid for the man's ability to play while thinking about not hurting his elbow; it was pretty obvious he was concerned about making sure he landed on his good arm as he took his chance. Meanwhile, he could have poked it past the keeper, near post. Lament.

Portugal will attempt to slaughter the North Koreans in their next match, while the Ivory Coast rumbles in the Bronx with Brazil. Based upon Brazil's uninspired play this afternoon, a draw or a win looks within reach for the Elephants. 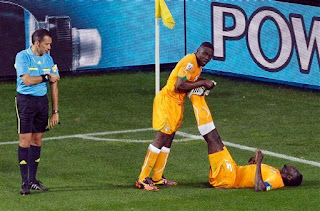 Finally, this is a funny photo of what looks like the beginning of a Cirque du Soleil act.

If someone could explain to me why Brazil's coach Dunga looked like a gay man at a ski chalet who had stolen a doorman's jacket, I would be eternally grateful. No, seriously. What the fuck is he wearing and who told him it was okay to go out in public looking like that? I'm not a stylish man, but damn, even I know not to leave the house looking like you mugged a bellhop while wearing a Jason Bourne sweater. Wowzers.

For whatever reason (read: Because Dunga is a bad coach), Brazil looked like a pile of mediocre shit today. Granted, they still won the game 2-1, but it took a lot of luck to get them there. Curious as to why? We'll figure it out together.

A basic summary of the match is as follows: Brazil played an extremely lackluster game, and North Korea looked legitimately dangerous on the counter attack. The NorKors surprised me. While most of their game was spent defending, I would not say that they play a negative style. They tried to beat Brazil in the best way they knew how: draw the majority of the Selecao forward, then spring the break. For the record, it eventually worked. Back to the beginning, though. The game opened to emasculating images of North Korean striker Jong Tae Se crying during his country's national anthem.

The match was tied 0-0 well into the second half, and while Brazil had enjoyed the majority of the possession, I wouldn't exactly say they were winning. NorKor was defending really well. They were organized and frustrating. The play that eventually broke the game open was a miss-hit cross from the foot of Maicon that snuck past the keeper who, like everyone else in the world, was playing the cross, and bent into the net basically from the endline. Nobody shoots from that angle. IT. WAS. LUCKY. AS. SHIT.

Eventually, Brazil SORT OF settled into being Brazil and scored another goal off a slick through ball from Robinho that Elano passed into the sidenetting. Though they were winning, they weren't exactly WINNING if you catch my drift. I'm fairly certain that the majority of Brazilians back home are not happy with the performance their team produced.

For the record, I'm not, either.

The game wasn't quite over, though. North Korea broke forward in the 89th minute, Ji Yun Nam blasting into the box and slotting his shot home past a floundering Julio Cesar. I really wasn't sure how to feel at that point. Now, as much as I don't agree with the politics of KimJongIl, and, as much as I know any measure of success their team enjoys will only serve to glory a legitimately evil regime, as this game went on, I found it harder and harder not to cheer for the NorKors. It turned into a real predicament. When they scored, I actually cheered. Then I felt ashamed. Then I felt sorry for the players, as they can't change the political climate in their home country. Then I felt hungry. It was an odd set of emotions.

Brazil looks weeeeeaaaaaaak. I don't know if this trend is going to continue, but if either of the other two teams in the group had played them today, the Selecao would have suffered the indignity that is a loss. To their credit, North Korea played a gritty, spirited game. Thanks for making me feel conflicted, you assholes.

6:30 CDT - Chile and Honduras try and settle the age old argument of what is better, Llamas or Sea Turtles. Expect a lot of pain and cracked shells. Chile wins in a landsl... in a bloodbath. I mean bloodbath.

9:00 CDT - Spain and Switzerland get together for a beer. After said beer, Spain scores 4,000 goals. Zurich voids all Spanish accounts in retaliation. World War III ensues. 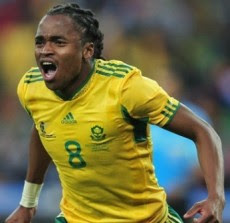