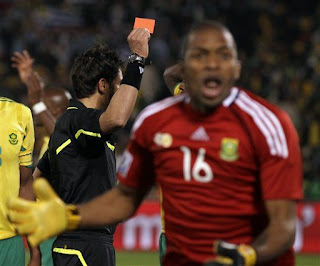 I'm a little stunned, given the events of today's games. I feel a little violated, kind of like that time my SCABA baseball coach kept talking about giving me a massage. Yuck to the 12th power.

Chile needed a little bit of luck to finish off Honduras in the early game, but all in all, they deserved the win. The men of the long thin country held the ball for the vast majority of the game and outshot the Hondurans by a three to one ratio. Even though their goal was mostly a function of being in the right place at the right time, as an attempted clearance on a low cross careened off the oddly named Jean Beausejour and into the net.

Chile nearly doubled/triple their lead a bunch of times over course of the second half, but some divinely inspired goalkeeping by Noel Vallardes kept Honduras TECHNICALLY in the game till the final whistle. Really, the whole game was kind of crazy-town. I kept expecting Chile to figure it out and score a small flock of goals, but the breakthrough never came. Seems like a continuing theme for this tournament.

I don't even know what the deal was with the Spain v Switzerland match. Take a gander at the game stats and you tell me if it makes sense: 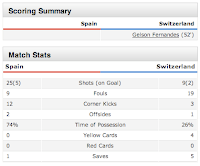 Switzerland bunkered in their defensive end during this game harder than any team has EVER bunkered before. It reminded me of the Barcelona vs Inter Milan games in the semis of the Champions League, only Switzerland's players are hella shittier than Inter's. I think the best way to describe it is AN AFFRONT TO SOCCER.

Die Schweiz scored their goal on some serious Route 1 football, with Blaise Nkufo (sweet name) nodding a long ball into the path of Eren Derdiyok, who clusterfucked Iker Casillas, Carlos Puyol and Gerard Pique in one fell thrust, leaving the ball sitting four yards out of a basically open goal mouth. The ball fell to the feet of Twofer look-a-like Manuel Fernandes who finished the move with great ketchup and relish. Spain had roughly forty minutes to mount a comeback. It never happened.

Here's a short list of the Spanish players that sucked and why: 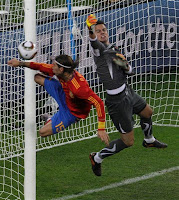 Xavi Alonso had the best chance of the game, smashing the ball into the crossbar from 25 yards off a corner kick. It was pretty indicative of Spain's night, which ended in agony. Let's get one thing clear: I wouldn't say that Switzerland beat Spain. Spain clearly lost to Spain. There's a BIG difference. Shocking.

I'm feeling really bad for South Africa right now. Like, really, REALLY bad. Everyone (except for assholes) likes an underdog, and it would be quite the sad day if Bafana Bafana were the first host nation to not make it out of the group stage. 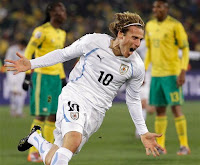 That said, Uruguay played a good game. La Celeste split possession pretty evenly with South Africa, but they made MUCH more with the time they had on the ball. Forlan's first goal looped over the keeper, mostly due to it clipping off Mokoena's shoulder, but it was still a pretty good strike.

The foul that led to Uruguay's second goal WAS a penalty, but Jesus Christo, that guy made a meal of it. I would be embarrassed if billions of people saw me on television acting like a little bitch. I don't know if there's any way to avoid giving the keeper a red card in that situation (according to the Laws of the Game), but if it had happened anywhere else on the field, he would have simply been called for a foul. 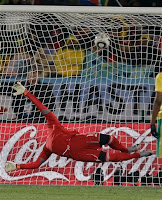 The game's third goal I'll chalk up to South Africa throwing too many people forward. When he went up for the header, it looked like Alvaro Pereira was trying as hard as he could to NOT tuck the cross away, but his best intentions were foiled and he scored anyway.

On the heels of this loss, it's apparent that South Africa needs a lot of math to go their way if they want to qualify for the second round. Good luck, boys. I've got my fingers crossed.

Everyone expects Argentina to win this game and they probably will. That said, SoKor doesn't NEED points from this match to advance. As long as they take it to Nigeria in the last game, they can't be caught.

Nigeria still has a chance at qualification, that is, if they can win this game. Greece, there's no way you're going to beat Argentina in the final match, so you are now officially cast in the role of Nigeria's Dream Spoilers. Duke it out, bitches. 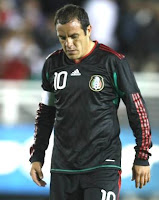 Okay, I think I figured it out. In order for South Africa to qualify, they need Mexico to lose its next two games. Given this set of events coming true, South Africa will then have to take out the French on the final matchday. It's an uphill battle.