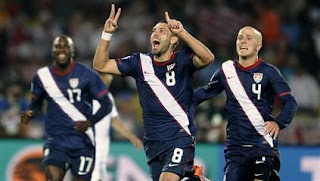 The first cycle of games in the Group Stage has come and gone. Would you like to talk about my feelings?

I'm not gonna lie: I'm disappointed. If we're being honest, the first game cycle of this tournament has been a little boring. Let's look at some statistics that back up my opinions:

While, on the one hand, the argument could be made that so many close games mean tight competition at a high level of play, if you've actually watched any of the matches, you'd know that's not the case. So far, this has been a World Cup based on DEFENSE: packing it in the back, hoping that you go up one goal, then packing it in even further (see: France v Uruguay or Switzerland v Spain).

It's not that I want to see a bunch of blowouts; I just wish there was more than one game in which both teams scored that didn't end up as a tie. Hopefully, in the second round, with teams suddenly realizing they're in need of a win to advance, things will pick up a bit.

BEST GAMES of the FIRST ITERATION

I still can't tell if this game ended so badly because Germany is really good or Australia is super bad. Whatever the reason, at least it was entertaining. There was a controversial red card, some great passing and a bucket of goals for the Germans, all of which were fun to watch. Will we see similar brilliance when they face Serbia? (PS: I still hate Germany) 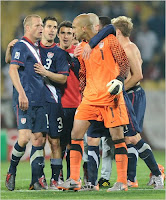 And I'm not just saying it because I'm American. This game had a lot of great moments: An early goal, a huge gaffe, up and down attacking play, some painfully missed chances and an excellent goalkeeping performance. The match was about as hard fought and drama filled as a draw can get. Quote me.

Not only is this the lone example of an African team actually winning in the first round, but it was a game with plenty of drama to spare. Ghana controlled the match through the midfield against a supposedly stronger European opponent, winning it on a late, late penalty from Asamoah Gyan. Things could have ended differently though, with Serbia missing two excellent chances in the second half.

Uruguay is in the driver's seat after stomping the hosts this afternoon. Second place hinges on the result of tomorrow afternoon's match between France and Mexico. I'm still holding out hope that South Africa can make it out of the group, even though it's a looooong shot.

It's hard for me to imagine Argentina losing to South Korea (thought stranger things have happened). Assuming there's no upset, if Greece v Nigeria produces a win, you've got a two horse race for second place. If not, SoKor should make the second round.

I can pretty much guarantee that both English speaking teams will win their next two games. Though I'm still fairly certain that England will finish Group C in first place, it's only going to be thanks to goal differential. Slovenia and Algeria are cannon fodder.

Up to this point, Germany have been the class of the tournament. I hate that I have to say that. If Serbia can't unseat them in their next game, Ghana qualifies from the group in second place. Australia is regrettably a lost cause. I still love you, Socceroos.

The Netherlands, despite their lackluster first game, is the definite class of Group E. While Japan has a win in hand, it's still uncertain whether they'll be the team joining the Dutch in the second round. Both Denmark and Cameroon still have a shot at glory.

Barring a miracle, Italy and Paraguay are the two teams that will advance from Group F. By failing to beat the plucky Kiwis in their opening game, Slovakia hopes have been dashed on the mountainside. I officially name this The Easiest Group in the World Cup.

It's the Group of Death! Brazil leads the pack, but only by virtue of playing North Korea before anyone else. It's really a pity NorKor can't play itself; that way, they could earn a point or three. Actually, in their opening game, Brazil looked fairly poor, so I'm not sure how their games against Portugal and the Ivory Coast are going to pan out. Second place may come down to goal differential, specifically who beats NK by more goals.

Crap shoot. Spain is in the unenviable position of needing two wins, then relying upon Switzerland to knock Chile out of contention by handing them a loss or a tie. If Chile beats the Swiss, the only other way the Spanish can advance is if Honduras gets a result (tie at best) against the Neutral Ones. I doubt Honduras has the firepower to get it done against any team, though.

I am hopeful for some hijinks in the second round. If anything, simple mathematics will make each game SEEM more meaningful. Concrete consequences can make even the most boring 0-0 tie seem somewhat enthralling.

After playing pretty alright against England, I hope the USMNT doesn't shit the bed against Slovenia. I truly believe that we can make it to the quarterfinals this year if we play confidently and avoid freaking out. 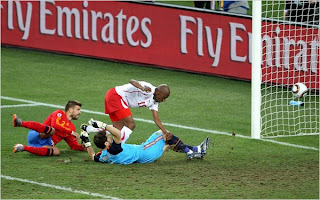 Of all the teams on the brink of elimination, I hold out hope that the Spanish can wriggle their way through to the second round. They're too classy of a team to not have a chance at the title.