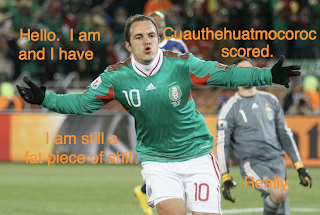 Remember yesterday when I was all complaining and shit? Well, The Gods responded with 10 goals in one day. Thanks, The Gods.

GAME ONE - Argentina vs South Korea

I guess Argentina finally decided to show up.

While there was a brief moment in this game where things could have ended very differently (read: when Yeom Ki-Hun botched South Korea's best attack of the second half AND a chance to tie the game 2-2), Argentina (read: Lionel Messi and the people he passed the ball to) pretty much dominated the world this morning. If it hadn't been for Martin Demichelis being a complete idiot (read: gave the ball to Lee Chung-Yong in a one-on-one with the keeper) in the final minute of the second half, I doubt South Korea would have been in the game at all. Then again, the Koreans didn't really do much to help themselves out (read: gifting the Tinos an own goal to open the scoring).

Higuain notched a hat-trick and Diego Maradona jumped up and down a lot. All in all, with a 4-1 win, it was a great day to be Argentine.

Losing by three goals isn't exactly a great experience, but if SoKor can beat Nigeria on the final day, they're guaranteed a spot in the knock-out stage. Even if Argentina loses to Greece, they would still finish the group in second place, which means it's party-time in Buenos Aires. Imagine I just said something funny about Evita.

I think I might be done rooting for African teams. The constant disappointment hurts me too much to continue.* 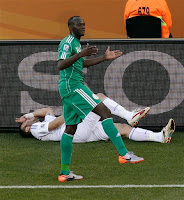 Greece beat Nigeria 2-1 after being up a goal, mostly due to Sani Kaita's red card when he reflexively kicked out at Vasilis Torosidis as the Greek defender faked throwing the ball into the Nigerian's face. Kaita's foot grazed Torosidis's shin, but from the way he reacted, you would have thought the man writhing on the ground had the rapture or had been triple-tased.. It was probably the worst case of acting I've seen all tournament, and that's saying something. So:

Greece's winning goal was the first example I've seen in this tournament of the Jabulani (that's the highly controversial ball, in case you're a complete idiot) creating a goal out of nothing. Nigeria's EXCELLENT** goalkeeper, Vincent Enyeama, was set to receive a low shot when the ball suddenly swerved to his left over it's last three yards of travel. The Jabulani clanged off the keeper's shin and into the path of, you guessed it, the BIG, FAT CHEATING TOROSIDIS, who finished his evil works for the day with a cheap goal.

Greece can only advance if they tie or win against the Tinos and South Korea loses. Nigeria can still advance, but only if they beat South Korea and Greece loses to Argentina. In that situation, Nigeria (-2 GD), Greece (-1 GD) and SoKor (-1 GD) would all be tied on points, and since they've each beaten a different team, goal differential would decide second place in the group, which would go to Nigeria. Math!

So, it was like COLD and stuff so the French were all "Oui need blahnketss" so they got some blankets and Thierry Henry wasn't playing, so the announcers talked about that for a long time because the game was really boring for about 64 minutes and neither team really did anything so I just sat there and did my homework because what else are you supposed to do when nothing is going on and both teams suck? 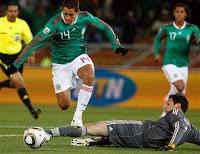 Then, like this Mexican player was all offsides but the refs didn't see that he was offsides because it was a fast play and a hard call to make, which happens sometimes and stuff, but of course you're gonna complain about it when it makes the team you want to win not be winning, and the Mexican player scored, but I don't know who he was because all the Mexican players look alike to me, but then the announcer said his name was Javier Hernandez, but I thought, if you're gonna have a name like that, you might as well be named Taco Burrito, but his name doesn't really matter and he scored anyway, which was a total bummer, because now South Africa won't make it to the knock out stages and that really sucks and stuff.*** 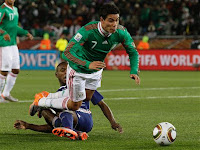 So after that, this other Mexican dude was like dribbling and shit and he was all "Voy a tomar la bola en el rectángulo y después a intentar ganar un penalti," which he totally did****, and then this one dude with a huge head and a beer belly sauntered up to the PK spot and like scored the goal even though that meant that Mexico was winning by even more than they were before, which told me that he didn't care about my feelings at all, so I told him we were breaking up, but we weren't going out, so I told him that if we were going out, I would like totally break up with him and stuff.

If Serbia wants to advance, they have to win this game. Too bad they won't. Too bad for my tournament predictions, as well. 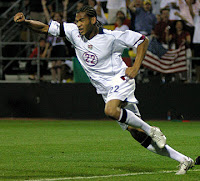 *Dear Teams From the African Continent, Especially You, Nigeria-

WHY DO YOU DO THIS TO ME? SERIOUSLY. ALL I WANT IS FOR YOU TO DO WELL, TO WIN, TO ADVANCE TO THE SECOND ROUND, AND YET, NO MATTER HOW HARD I ROOT FOR YOU, NO MATTER HOW MUCH I PRAY AND WISH AND HOPE, YOU COMPLETELY FAIL ME. YOU CONTINUE TO UNDERPERFORM, TO MISS CHANCES, TO PLAY LACKLUSTER-LY ON BOTH SIDES OF THE BALL. IT MAKES ME WANT TO PISS AND SPIT AND POOP MY FUCKING PANTS. THIS WAS SUPPOSED TO BE YOUR TOURNAMENT, YOUR YEAR, YOUR TIME TO SHINE. BUT YOU'VE RUINED IT, AND IN THE PROCESS, I THINK YOU'VE RUINED ME. I HOPE YOU'RE HAPPY, YOU DUMB FUCKS. I HOPE YOU DIE FROM SYPHILIS.

**Enyeama had ANOTHER amazing game. If it wasn't for him, Nigeria would have lost 4-1.

****This was a classic example of a player looking for a foul as soon as he gets in the box. While, technically, I guess it was a penalty, Pablo Barerra definitely dragged his feet behind him to catch Abidal's legs. If he has continued moving, he would not have been touched at all. Is this cheating? Technically, no. Is this dishonorable and a super bitch move? Absolutely.